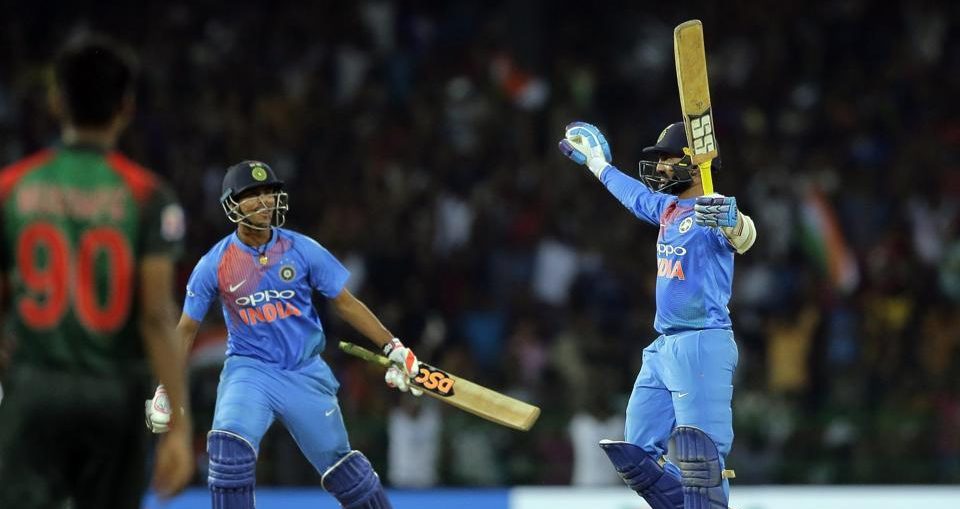 Dinesh Karthik, who was demoted to number seven in the Nidahas Trophy final against Bangladesh, saved Rohit Sharma’s side the blushes with a magnificent cameo to clinch the title, finishing off with a Javed Miandad-esque last-ball six.

India’s Dinesh Karthik, right, celebrates scoring the winning runs to defeat Bangladesh by four wickets during the final of the Nidahas Trophy triangular Twenty20 cricket series in Colombo on Sunday.

India had slipped badly in their pursuit of 167 in the final of the Nidahas Trophy 2018 tri-series against Bangladesh. Rohit Sharma’s side needed 34 off 12 balls. Vijay Shankar, batting in the tournament for the first time, struggled with dot ball pressure. Manish Pandey, who had struck some lusty blows, had fallen for 28 in the 18th over. Mustafizur Rahman had just bowled a wicket-maiden to put Bangladesh on top.

“He was quite upset with that (demotion). I told him whatever skill you have, it will be required in the last three or four overs. Had we lost the game, you can say that it would have looked bad. But that was the idea – to have Dinesh at the back end, because he’s batted in that position in a list of games for his state teams,” Rohit said.

Although Karthik was upset, he was determined to give India the Nidahas Trophy. The tone was set in the first ball of the 19th over itself. Rubel Hossain, who had figures of 3-0-13-2 before the over, bowled a low full toss which Karthik hammered over long on. The next ball was worked past the gap at mid on. Suddenly, India found reason to believe.

The third ball was clobbered over deep midwicket for his second six. After a dot ball and two runs, Karthik scooped a full ball over short fine leg for his second boundary. Rubel was hit for 22 runs and India needed 12. In the final over bowled by part-time bowler Soumya Sarkar, Shankar continued to struggle but managed a four off the fourth ball to narrow the deficit to five off two balls.

However, he fell in the next ball as he tried to finish the match off, but the batsmen crossed, meaning Karthik was on strike.

The Indian wicketkeeper sealed the deal in grand style by carving a six over deep extra cover to help India achieve an improbable win. It was reminiscent of Javed Miandad’s last-ball six, with five runs needing from it, in the final of the Austral-Asia Cup against India in Sharjah in 1986. Only this time, it was India who won.

Speaking after the match, Karthik revealed what kept him going. “I have been saying this over and over again; the Indian team right now is a tough place to get an opportunity but once you get it, you got to make best use of the opportunity,” Karthik said after his Man of the Match performance.