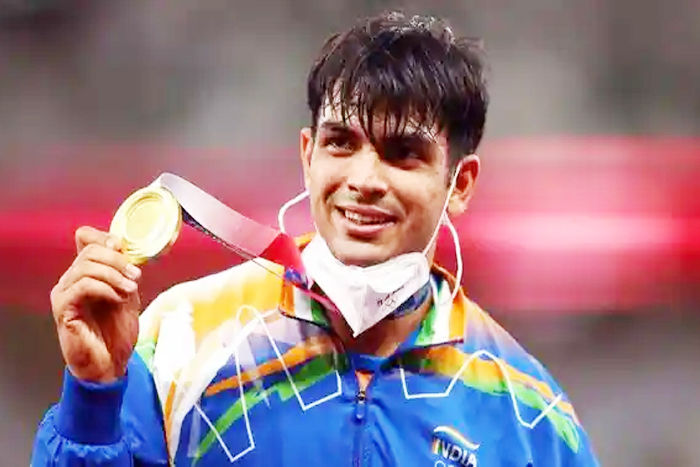 IndiGo announced that it will offer unlimited free travel for one year to javelin thrower Neeraj Chopra after he won the gold medal at the Tokyo Olympics on Saturday.

It’s raining rewards for Neeraj Chopra after he secured India’s second individual gold in Olympic history with a sensational performance at the Tokyo 2020 Olympics. The 23-year-old athlete from Haryana has been honoured by several state governments and private organisations for his remarkable achievement.

On Saturday, Punjab Chief Minister Captain Amarinder Singh announced a special cash reward of Rs. 2 crore for his award-winning 87.58m javelin throw in Tokyo. The Chief Minister said that it was a proud moment for India and all Punjabis, since the family of Neeraj Chopra, a serving soldier of Indian Army, traces its roots to Punjab.

Notably, Neeraj Chopra practiced most of the time at NIS Patiala. Earlier, he had won a gold medal in Asian Games and Commonwealth Games in 2018 and was current national record holder with 88.07m throw. He had also won the gold medal in Junior World Championship and set U 20 World Record with 86.48m throw.

It is the second Gold Medal by an Indian in the individual category of the Olympic Games after Abhinav Bindra, hailing from Punjab, won the gold medal in the 2008 Beijing Olympics.

Chopra will also get a cash reward of Rs 6 crore, Haryana Chief Minister ML Khattar said on Saturday. Khattar also declared that Chopra will be made head of the upcoming Centre for Excellence in Athletics in Panchkula.

“As a mark of appreciation and honour on his stellar achievement, CSK is awarding Rs. 1 Crore to Neeraj Chopra,” said CSK in a statement.

Anbuden saluting the golden arm of India, for the Throw of the Century!

Meanwhile, IndiGo announced that it will offer unlimited free travel for one year to Chopra after he won the gold medal at the Tokyo Olympics on Saturday.

In a statement, Ronojoy Dutta, Chief Executive Officer, IndiGo said, “Neeraj we were all overjoyed to hear about your remarkable achievement. You have made the country proud, and I know all IndiGo employees would be truly honoured to welcome you onboard one of our flights.”