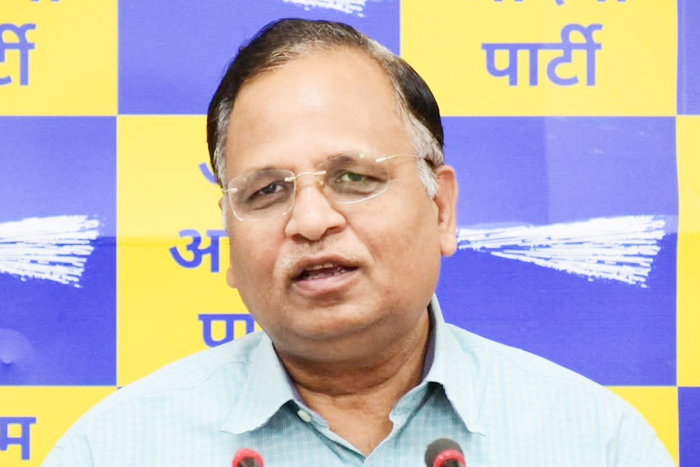 Satyendra Jain Arrested: In April, assets worth Rs 4.81 crore of the family and companies ‘beneficially owned and controlled’ by Satyendar Jain were provisionally attached by ED.

New Delhi: The Enforcement Directorate on Monday arrested Delhi Health Minister and AAP leader Satyendar Jain in a case connected to hawala transactions related to a Kolkata-based company, ANI reported. The minister was taken into custody under criminal sections of the Prevention of Money Laundering Act (PMLA).

In a tweet, Delhi deputy CM Manish Sisodia said a “fake case” was being run against Satyendar Jain for 8 years. “ED called many times before and stopped for many years in between as they couldn’t find anything. Now, it’s started again as he’s poll in-charge of Himachal Pradesh…He will be released in few days as case is bogus,” Sisodia tweeted.

Last month, assets worth Rs 4.81 crore of the family and companies “beneficially owned and controlled” by Jain were provisionally attached by ED.

The ED, during investigation, found that “during the period 2015-16, when Satyendar Jain was a public servant, the companies beneficially owned and controlled by him received accommodation entries to the tune of Rs 4.81 crore from shell (paper) companies against cash transferred to Kolkata-based entry operators through the hawala route“.

The CBI has claimed that Jain purchased 200 bighas of agricultural land in the names of companies controlled by him in Delhi in five years preceding 2018 and “laundered black money” to the tune of several crores of rupees.

The laundered funds were allegedly used to purchase over 200 bighas of land in Auchandi, Bawana, Karala and Mohammed Mazvi villages in Delhi between 2010-16, the CBI had said.

The Income Tax department too had probed these transactions and issued an order attaching “benami assets” allegedly linked to Jain.