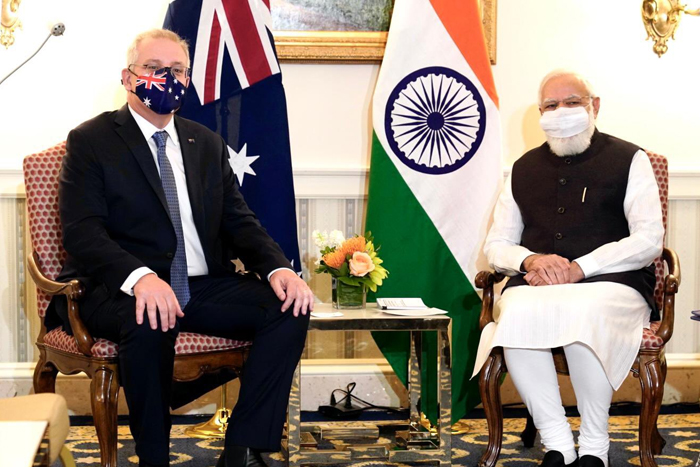 They discussed an entire range of issues including the recently launched military alliance of Australia, the United Kingdom and the United States called AUKUS.

Indian Prime Minister Narendra Modi and Australia’s Scott Morrison held their first in-person meeting on Thursday ahead of the first in-person summit of Quad (Quadrilateral Security Dialogue) they will attend on Friday at the White House, joined by their host US President Joe Biden and Japan’s Yoshihide Suga.

“Outstanding,” Scott Morrison said when asked how the meeting went. He refused to say more.

The meeting lasted much longer than its appointed time, which, both Indian and Australian officials said, was “a good thing”.

They discussed an entire range of issues including the recently launched military alliance of Australia, the United Kingdom and the United States called AUKUS, which aims chiefly to equip Australia with nuclear-powered submarines for deployment in the Indo-Pacific region.

Scott Morrison had briefed Narendra Modi on the AUKUS alliance before it was announced formally.

A source familiar with the planning of the prime minister’s visit and his bilateral meetings described India-Australia ties as an “important relationship (which) is developing very quickly” and said a meeting of the two leaders had been “long overdue”.

Prime Minister Narendra Modi will meet US Vice-President Kamala Harris for his second bilateral of the day. In the evening, he meets Prime Minister Yoshihide Suga, the fourth member of the Quad bilaterally later on Thursday.

He will hold his final bilateral meeting on Friday, with President Biden, just ahead of the Quad summit.