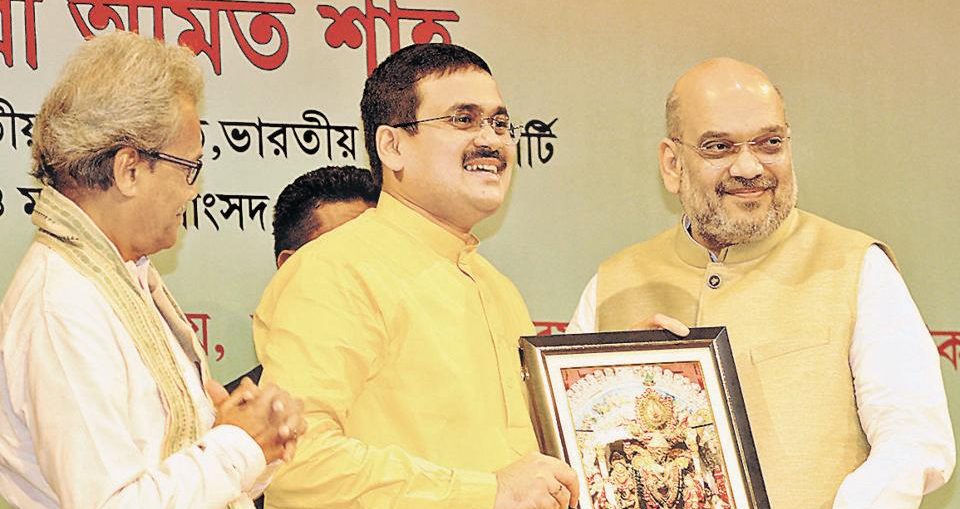 Rajnarayan Basu, a key figure of the 19th century Bengal Renaissance, was among the initiators of a Hindu Mela (fair) in 1867 to celebrate the glorious past of Indian civilisation. The fair, which became known as the Jatiya Mela (national fair) and Swadeshi Mela (indigenous fair) as well, was billed as the beginning of ‘Hindu Revivalism’.

Scientist and nationalist entrepreneur Acharya Prafulla Chandra Roy authored, among other books, the ‘History of Hindu Chemistry – From the Earliest Times to the Middle of the Sixteenth Century A.D’, a book that documented India’s indigenous chemical practices starting from the Vedic era.

Prominent 20th century intellectual Rezaul Karim was a liberal nationalist and a staunch opponent of the Muslim League’s ‘two nation theory’. He held that a common culture unified Hindus and Muslims of India.

Ramananda Chatterjee, who edited Prabasi and Modern Review journals, became a vocal supporter of Hindu mobilisation during the late 1930s and early 1940s.

Now, the Bharatiya Janta Party (BJP) has decided to highlight the legacy of Basu, Roy, Karim and Chatterjee, apart from littérateur Bankim Chandra Chatterjee and Bharatiya Jana Sangh-founder Shyama Prasad Mookerjee. Others include revolutionaries belonging to the terrorist organisations Jugantar Dal and Anushilan Samiti who drew inspiration from the Bhagavad Gita and Vande Mataram.

Just before the saffron camp plans to launch the campaign for Bengal in the run-up to the 2019 Lok Sabha elections, this is an initiative aimed at “changing Bengal’s public psyche” and “redefining the Bengali identity”.

The aim is to counter the propaganda that BJP and its brand of Hindu nationalism belong to the ‘cow belt’ and are alien to Bengali society and culture. “I have written to Amit Shah saying that Jai Hind and Jai Maa Kali resonates far better in Bengal than Bharat Mata Ki Jai and Jai Shri Ram,” said Chandra Kumar Bose, Bengal BJP vice-president and a nephew of Netaji Subhas Chandra Bose.

The Delhi-based BJP think-tank Shyama Prasad Mookerjee Research Foundation (SPMRF), will organise a series of small, medium and large scale events centering on these personalities in different districts of Bengal over the next couple of years.

“When Rajnarayan Basu and members of the Tagore family supported its naming as Hindu Mela, they referred to the Indian culture. That is what we mean when we say Hindu,” said Anirban Ganguly, who heads SPMRF and is a member of BJP’s central policy research wing.

“People mock at us for highlighting India’s ancient knowledge and achievements. But when they read it from Roy’s book, their mindset will change,” Ganguly said.

The first big event was conducted on June 27, when BJP president Amit Shah delivered a speech on Bankim Chandra. The next are scheduled this month in Burdwan and Birbhum districts where Bengali academics and scholars from different parts of the country will speak on Bengali revolutionaries.

Among those expected to address the events are Dasgupta and economist Bibek Debroy.

Organisations named after Mookerjee are being formed in districts to rope in locally influential teachers, doctors and lawyers for small scale events.

“We are not importing nationalism. We are reminding people that Bengal is one of the places from where the idea of nationalism spread across India,” said Syed Tanvir Nasreen, a member of the SPMRF and professor of history and head of women’s studies, University of Burdwan.

A BJP leader said Shah had instructed the party to do a careful study of Bengal’s history.

“During 2014-15, we were stepping up cow vigilantism. But the party’s policy makers found out that a similar movement in the early 1950s found no resonance in Bengal. So, our cow protection cell was asked to maintain a low key,” said a state committee member who spoke on condition of anonymity.

The gradual shift to identifying with the Bengali psyche will also see more and more BJP leaders taking an active role in organizing Durga Puja and Kali Puja. The Sangh parivar’s main religious events in Bengal so far have been Ram Navami and Hanuman Jayanti.

Winning at least 22 out of the 42 Lok Sabha seats in the state is one of BJP’s key objectives.

In the Lok Sabha elections held in 1952, the newly-founded, Mookerjee-led Bharatiya Jana Sangh, the political wing of the Rashtriya Swayamsevak Sangh, won three seats, two of which were from Bengal. Currently it has two MPs from Bengal and never had a higher number. In the 294-seat Assembly it has three MLAs, the highest since the Jana Sangh won nine seats in 1952.

According to Dasgupta, Mookerjee’s untimely death in 1953 left the Jana Sangh in Bengal leaderless and the Left, taking this opportunity, brought under its fold the refugees from East Pakistan whom the Hindu nationalists hoped would be their largest constituency. Thereafter, Leftist influence overwhelmed ‘Bengal’s collective thinking’.

“Winning over Bengal intellectually is no less important than winning votes. A Left liberal consensus in Bengali psyche is undeniable. Winning it over is going to take time,” said Dasgupta.

The saffron camp has also decided not to antagonise Left supporters. “None can deny the sacrifice and contribution of Left leaders of early days. We are pointing out degeneration among present-day leaders,” Jisnu Basu, general secretary of south Bengal RSS, said. “It is with Left supporters and sympathisers that we want to engage in debate.”

According to political analyst Debasish Sarkar, principal of Chandernagore College, BJP is bringing forth socio-cultural issues to duck economic questions.

“They are trying to make an entry by striking a cultural connect, but what will they answer when the youth ask them about ({Prime Minister Narendra) Modi’s promises in 2014? Economic questions will haunt them even without the existence of an opposition,” remarked Sarkar.

State Congress chief and Berhampore MP Adhir Chowdhury thinks BJP’s plan will fail. “Highlighting a particular part of history is part of their divisive agenda. However, in Bengal, the common people believe in secular and liberal ideals unshakably,” he said.

The Left agrees. “If the BJP wants to present a partial view of history, it will be soon thoroughly exposed,” said Sujan Chakraborty, leader of the Communist Party of India (Marxist) legislative party in the state Assembly.