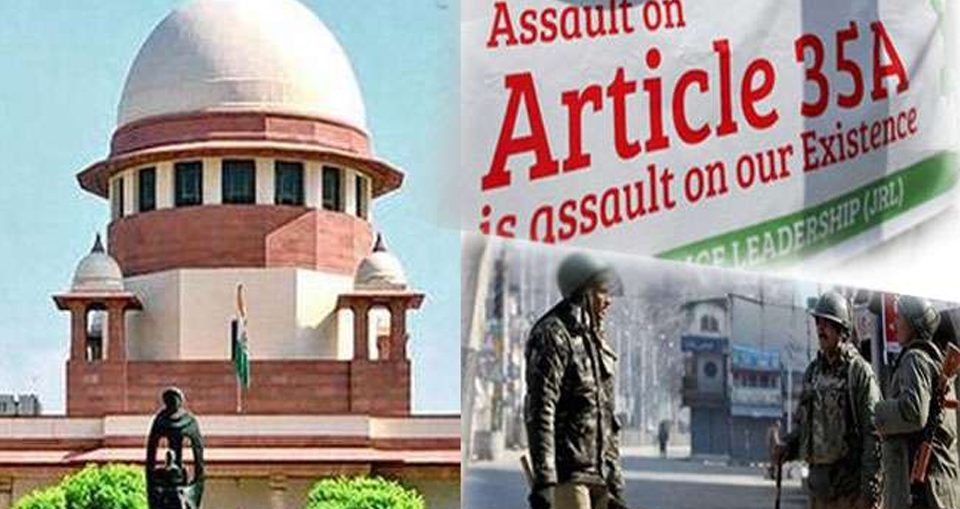 Separatists believe that removal or dilution of the law will enable “the country’s right-wing groups to change the demographic character as well as the disputed nature” of the state.

Article 370 of the Constitution grants special status to Jammu and Kashmir.

The Supreme Court is set to start hearing petitions challenging the validity of Article 35A of the Constitution on Monday. The matter will be taken up amid a statewide shutdown declared by Kashmiri separatists and a number of organisations.

Article 35A – which confers special rights on permanent residents – disallows outsiders from settling permanently, buying immovable property or availing of state-sponsored scholarships in Jammu and Kashmir. Separatists believe that removal or dilution of the law will enable “the country’s right-wing groups to change the demographic character as well as the disputed nature” of the state.

Four petitions, three clubbed with the main one filed by an NGO called We The Citizens, have challenged the legality of the law on the grounds that it was implemented on the President’s orders in 1954 without being presented before Parliament. The provision appears as an “appendix” in the Constitution and not an amendment under the Constitution (Application to Jammu and Kashmir) Order-1954.

The two-day statewide shutdown called by separatist leaders Syed Ali Geelani, Mirwaiz Umar Farooq and Yasin Malik under the banner of Joint Resistance Leadership began on Sunday. Summer capital Srinagar woke up to desolate roads and markets, with shops and commercial establishments keeping their shutters down and public transport staying off the roads amid heavy deployment of security forces.

While the Valley is no stranger to shutdowns, residents said they haven’t seen one this severe in the last 30 years. Even auto rickshaws – an otherwise-ubiquitous element on Srinagar’s roads – did not venture out, and the iconic shikaras (leisure boats) at Dal Lake lay moored in the jetties. There was a palpable fear that court could revoke the state’s special status, opening the floodgates for people from other parts of the country to pour in.

Meanwhile, separatists as well as organisations across the spectrum – including trade, tourism and civil society groups – have threatened to launch mass agitations if the article is revoked by the apex court. “We are ready to shed our blood for safeguarding our rights. Attempts are being made to remove Article 35A through the legal route, and we are not going to tolerate it,” said Kashmir Economic Alliance chairperson Yasin Khan.

Hurriyat chairman Mirwaiz Umar Farooq said India’s judicial bodies lack the jurisdiction to take a call on Kashmir’s special status. “No court – be it in India or Pakistan – has the authority to take decisions that can affect the disputed status of Jammu and Kashmir because its original citizens are yet to exercise the right to determine their final dispensation as promised by the UN and backed by India and Pakistan,” he said after chairing a high-level meeting on the issue.

“Any attempt to change the demographic character of the state and its disputed nature is intolerable. Our cadres and activists, along with the people, are ready for all-out mass agitation if any tinkering with 35A is allowed under the legal garb,” he added.

The Jammu and Kashmir Bar Association has already filed an intervention application in the Supreme Court to defend the constitutional provision that allows the state legislature to define ‘permanent residents’ and confers special rights on them.

Officials aware of the development said governor NN Vohra has also sought deferment of the hearing, and approached Union home minister Rajnath Singh in this regard. He wants the court to hear the issue only after an elected government comes back to power in the state.

The administration has taken several steps, including the temporary suspension of the ongoing Amarnath Yatra from Jammu to the cave shrine in the Valley, in view of the shutdown call. Police said no pilgrim is being allowed to leave Jammu’s Bhagwati Nagar Yatri Niwas.

However, pilgrims camped at the Baltal and Pahalgam base camps in the Valley will continue on the yatra. Over 2.71 lakh pilgrims have performed the pilgrimage this year since it opened on June 28.