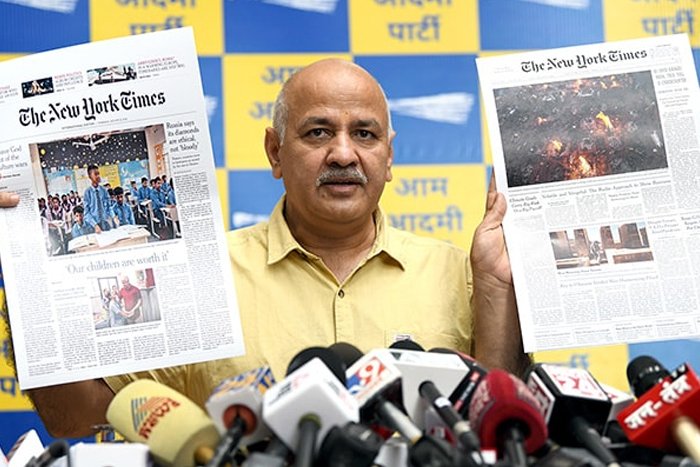 New Delhi: A lookout notice has been issued against Delhi’s Deputy Chief Minister Manish Sisodia and 12 other people named in a First Information Report filed by the CBI on liquor policy violations, restricting them from travelling abroad, officials said today.

The CBI had carried out searches at the residence of Manish Sisodia, who also handles the Excise Department, and 31 other locations on Friday over allegations of corruption in the liquor policy.

The lookout notice comes a day after Mr Sisodia launched a scathing attack on the BJP-ruled central government and Prime Minister Narendra Modi for “misusing the central agencies against the Aam Aadmi Party (AAP) because its work in the education and health sector is being discussed globally.

He alleged that the CBI officials were instructed by the “high command” to raid his home.

Mr Sisodia said the centre wanted to stop Delhi Chief Minister Arvind Kejriwal, who is also the AAP chief, because they see him as the main challenger to PM Modi in the upcoming general election in 2024.

“The 2024 election will be a battle between the AAP and the BJP,” he had said yesterday.

Mr Sisodia and his party have claimed that the centre was furious over the front-page shout-out to the Delhi education model in the New York Times on Thursday.

The Lieutenant Governor had recommended the CBI probe last month, accusing AAP of bringing the Excise Policy “with the sole aim” of benefiting private liquor barons for financial benefits to “individuals at the highest echelons of the government leading up to Manish Sisodia”.

The policy was rolled back by Mr Sisodia in July after a probe was started initially by the Delhi Police’s Economic Offences Wing.