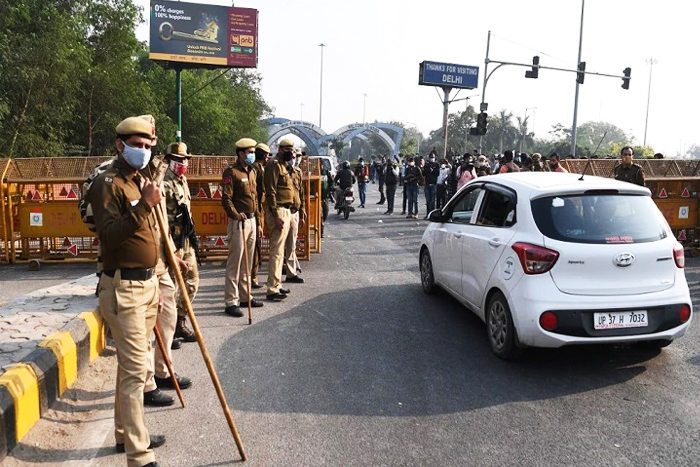 In view of Samyukt Kisan Morcha’s Mahapanchayat at Jantar Mantar on Monday, the Delhi Traffic Police has beefed up security and deployed more cops at the NCR.

In an official statement, the traffic cops said that special traffic arrangements have been made in view of Mahapanchayat by Sanyukt Kisan Morcha at Jantar Mantar.

According to the Delhi Traffic, the high likelihood of congestion are on the following roads:

In view of Sanyukt Kisan Morcha's Mahapanchayat at Jantar Mantar tomorrow, #DelhiTrafficPolice requests commuters to plan their journey in advance and avoid the mentioned roads for convenience. pic.twitter.com/YZ82dP4tbR

The farmer leaders said their agitation started with the arrival of farmers from Punjab, Haryana, Rajasthan, Madhya Pradesh, Tamil Nadu, Kerala and different parts of Uttar Pradesh from Wednesday night.

Lakhimpur Kheri is represented in Lok Sabha by Mishra, the Union Minister of State for Home.

His son Ashish Mishra is accused of the violence that took place on October 3 last year in which four farmers and a journalist were among the eight people killed.

The SKM core committee members, including Tejinder Singh Virk and Dr Ashish Mittal, had informed that their leaders would hand over two charters of demands to the Kheri district administration, one to be forwarded to Uttar Pradesh Chief Minister Yogi Adityanath and the other to Prime Minister Narendra Modi.

Mittal said the memorandum for the prime minister would stress on the demand to sack Mishra from the Union cabinet in view of his role in the violence, release of innocent farmers, implementation of Swaminathan report with MSP on C2 50% formula, withdrawal of cases against farmers and withdrawal of electricity amendment bill.