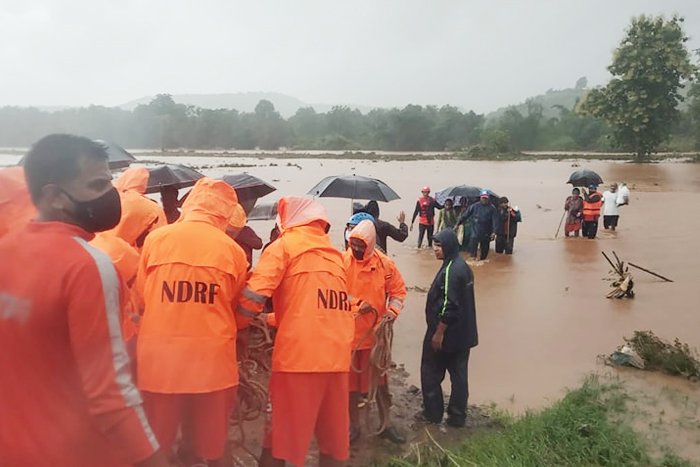 No respite from torrential rain seems likely in Madhya Pradesh’s worst-hit Gwalior-Chambal region in the next 24 hours. The Met department has sounded a red alert for Shivpuri, Sheopur, Guna and two other districts, besides orange alert for nine and yellow alert for other eight districts.

Mr Chouhan held a detailed discussion over the telephone with the PM.

“He (PM Modi) has been apprised about the flood situation in Madhya Pradesh and the ongoing rescue operation. Due to the situation getting worse, I have also discussed with him about taking help from the Indian Army in the flood-hit areas,” he added.

Mr Chouhan said, “We have asked for four columns of the army so that they are able to rescue the people who are stranded due to the floods. SDRF team is doing good work. Two ministers are in Shivpuri and are monitoring the situation and are in talks with me. One column of army is of 80 persons. They are sending one column each for four districts. From Jhansi, they are mobilising for Gwalior and Datia and from Babeena (UP) for Shivpuri and Sheopur.”

The Indian Air Force’s three ALH and Mi-17 helicopters have taken off from Gwalior and two more Mi-17 helicopters will fly shortly for rescue operations in flood-hit districts of Gwalior-Chambal region. Three villagers stuck on trees in Shivpuri have been rescued.

Five trains have been cancelled partially or are being run through diverted route (via Bina) by West Central Railway’s Bhopal Division as the rail tracks are submerged in rain and flood water between Shivpuri and Mahona stations of Guna-Gwalior section.

Five IAF teams have been waiting for the weather to improve. Mr Chouhan has requested the IAF teams to accord priority in rescuing those taking shelter on trees in Shivpuri district’s Bichi village since last night.

The chief minister also chaired an emergency meeting in Bhopal to take stock of rain and flood situation of Gwalior-Chambal region.

According to the latest updates, the authorities informed the chief minister that about 1,171 villages are affected due to heavy rains and floods in Parvati, Kuno and Sindh rivers in Shivpuri, Sheopur, Datia and Gwalior district. So far, 1,600 people have been rescued from flood hit areas of Gwalior-Chambal region.

Over 200 villages in Shivpuri and Sheopur districts are badly hit by heavy rains and floods. Shivpuri district reported 470 mm rainfall in last 24 hours and 798 mm rain in 48 hours.

100 people rescued from 22 villages of the district in morning. Efforts underway to rescue those taking shelter on trees in Dongar and Bichi villages.