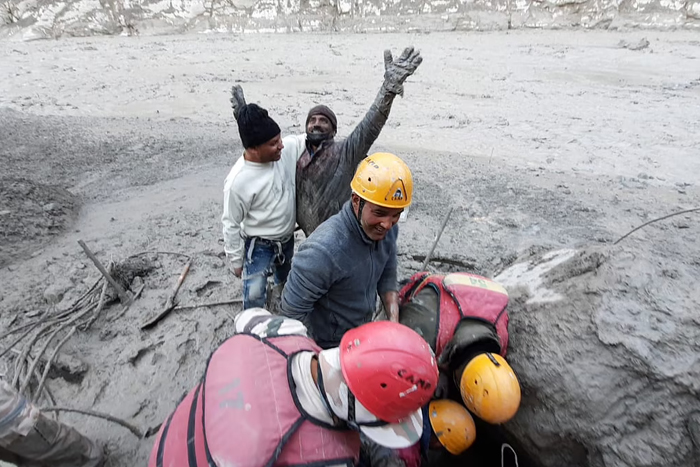 Uttarakhand Glacier Disaster: Apart from the terrain and the low temperature, mud and debris in a tunnel is posing a major challenge for the rescuers.

New Delhi: 14 people have been killed and over 170 are still missing, after a part of a glacier burst in Uttarakhand’s Chamoli district on Sunday, triggering an avalanche and a deluge in the Alaknanda river system that washed away hydroelectric stations and five bridges. The burst glacier also swept away roads and forced authorities to evacuate villages. National and state disaster response teams have been deployed, as have teams from the ITBP. The Army has sent six columns and the Navy seven diving teams.

Here are the 10 latest developments on the Uttarakhand glacier disaster:

170 people – 148 employed at the NTPC plant and 22 at Rishiganga – are still missing. Around thirty others are trapped in a tunnel, reportedly around 2.5 km long, and rescue teams worked through the night to save them. Efforts are still on. Apart from the terrain and the low temperature, mud and debris in the tunnel is posing a major challenge for the rescuers.

Twelve people trapped in an under-construction tunnel were rescued by an Indo-Tibetan Border Police (ITBP) team.

This morning, Uttarakhand’s State Disaster Response Force (SDRF) removed the debris and slush at the tunnel near Tapovan dam in Chamoli district as part of the rescue efforts. The SDRF members had to wait for the level of a river to lower, to begin rescue operations for the people who are stranded in the tunnel.

“Our team reached at 3 am. They’ve started the rescue operations. We hope for the best and are doing our best. We’re using the latest and the best of the equiment. The terrain is so rugged and the temp reached up to sub zero (conditions). In such conditions, it is diffcult to conduct rescue operations. But our team is doing its best,” NDRF commandant Praveen Kumar Tiwary told on the phone.

An early survey of the damage caused by the glacier break and flood to the Tapovan Vishnugad hydropower plant shows the dam has been “completely washed off”, Indian Air Force sources said on Sunday. The dam is located at the confluence of Dhauliganga and Rishiganga rivers, around 280 km east of state capital Dehradun.

The bridges that were washed away connected narrow roads in the hills with the 13 villages. Officials said arrangements are being made to airdrop food packets to the villages.

Uttarakhand Chief Minister Trivendra Singh Rawa, who visited Chamoli district on Sunday, has announced a compensation of ₹ 4 lakh each to the families of those who lost their lives in the disaster. An extra ₹ 2 lakh will be given from the Prime Minister’s National Relief Fund, with ₹ 50,000 for those with serious injuries.

“India stands with Uttarakhand and the nation prays for everyone’s safety.” Prime Minister Narendra Modi tweeted on Sunday. He said he spoke with Mr Rawat and that he is “constantly monitoring the situation”. Home Minister Amit Shah also tweeted; he said the Modi government stood shoulder-to-shoulder with the people of Uttarakhand.

The glacier disaster is a grim reminder of the monsoon floods in Uttarakhand in 2013, which killed 6,000 people and led to calls for a review of development projects in the state, particularly in isolated areas like those around the Rishi Ganga dam.

The increased pace of development in the region has also heightened fears about fallout from deforestation and other environmental troubles.