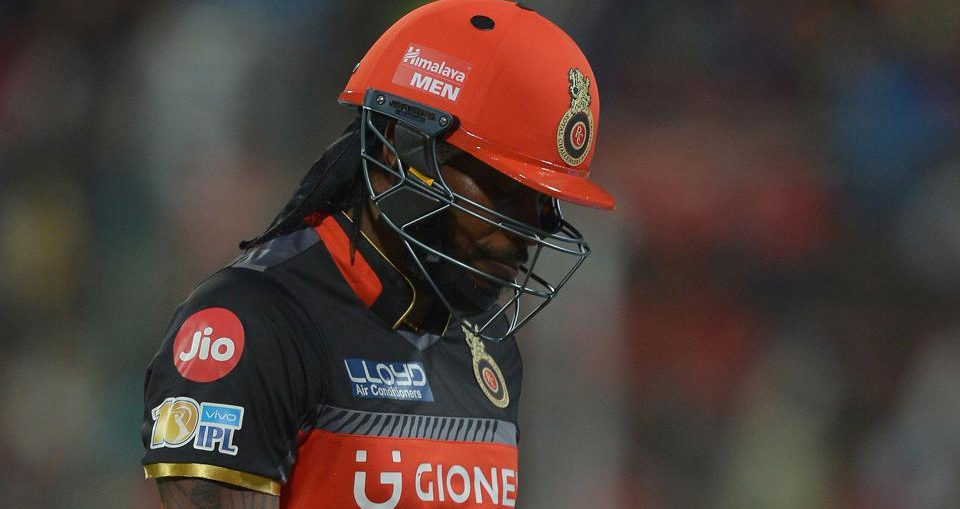 Royal Challengers Bangalore’s decision to bring back the fit-again AB de Villiers into the line-up meant that another superstar – Chris Gayle – had to sit out of the IPL 2017 match against Kings XI Punjab. Gayle is on the cusp of a T20 world record.

Royal Challengers Bangalore have now lost two out of three matches in the Indian Premier league (IPL) 2017, but AB de Villiers’ entry into the playing XI has given them a positive sign. The South African plundered an unbeaten 89 off just 46 balls to single-handedly guide RCB to a decent total against Kings XI Punjab in Indore.

AB de Villiers’ entry, however, meant that another superstar of RCB – Chris Gayle – had to sit out of the match. Gayle, just 25 runs short of 10,000 T20 runs, may have to wait a little longer considering AB’s form.

“Shane Watson has batted in the top order for all his career, so there was no question of changing his position. We had no option but to drop Chris Gayle to make way for AB in the top order.

“It was not a tactical strategy but simply we had no other choice. As soon as AB de Villiers is fit he walks into RCB’s playing XI,” Stuart Binny, the RCB allrounder, said.

READ | BCCI tussle: No ineligible official for meet, SC says ahead of hearing

Apart from Watson and AB de Villiers, who has recovered from a back problem, Tymal Mills and Billy Stanlake were the two other foreigners in the playing XI against KXIP. Mills and Stanlake are both fast bowlers. It remains to be seen if one of the two is dropped in the next matches to accommodate Gayle as RCB, in Virat Kohli’s absence, has failed to fire batting-wise.

Regarding their second loss in the 2017 IPL, Binny said, they did not put enough runs on the board and it led to their defeat.

“We did not put enough runs on board. When you are batting first, 148 runs is not a good score. In T20, the start is very important. If you are two down in the first four overs, then rest of the team struggles,” Binny said.

READ | IPL 2017: After getting new life, Imran Tahir all set to take on former team

“When we batted in the first innings, the wicket was a bit two-paced. The ball that was bowled cross seam, held in to the surface a bit. It was that kind of wicket, where you need 15-20 balls to get to read the pace of the pitch.”

The bowlers’ inability to take early wickets was also another cause, added Binny.

“When you have a low total to defend, it’s crucial to take at least two wickets in the power-plays. We could not do that against KXIP,” Binny said.