You are here
Home > DAILY BAWAL > “What Did They Do In 7 Years?” Priyanka Gandhi Charges At PM Modi In UP’s Amethi 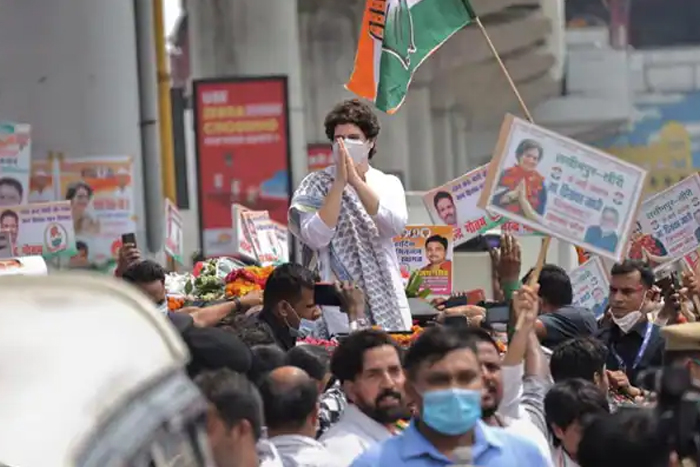 “What Did They Do In 7 Years?” Priyanka Gandhi Charges At PM Modi In UP’s Amethi

The BJP has been “spreading a web of lies” ever since they formed the government both at the centre and the state, Priyanka Gandhi said.

Congress leader Priyanka Gandhi Vadra on Saturday hit out at Prime Minister Narendra Modi and the BJP at a party rally with brother Rahul Gandhi, raising the deaths during the second wave of COVID-19 and rising prices.

“What did the BJP do during the first wave of COVID-19? The party was responsible for the lack of oxygen cylinders,” she said about the deaths during the second wave many of which were because of the lack of adequate medical supplies like oxygen.

She also took on the BJP’s frequent charge that the Congress had done little for India during its rule after Independence 74 years ago, asking, “What did the (BJP) government do in Amethi for seven years? There has been one-sided development only in BJP’s favour.”

She also said that people were struggling because of the rising prices and demanded why junior Home Minister Ajay Mishra Teni, whose son has been accused of killing protesting farmers, has not been sacked yet. The BJP has been “spreading a web of lies” ever since they formed the government both at the centre and the state, she said.

Ms Gandhi Vadra also made promises ranging from waiving loans for all farmers and generating 20 lakh jobs if her party was voted to power in the assembly elections in the state due early next year.

“Congress will waive off loans for all farmers and small businessmen, halve the electricity bills, give employment to 20 lakh youth and ₹ 25,000 to all the families who suffered due to COVID-19,” she said.

“In case of disease, the government will provide healthcare of ₹ 10 lakh. To politically empower women, 40 per cent of tickets will be given to them. Girl students will get smartphones and scooty to empower them and for their security,” she said adding the present government has led people astray.

Ms Gandhi and her brother’s rally in Amethi saw a huge turnout and was closely watched given that it had been a Congress bastion for years with Rahul Gandhi representing the constituency for 15 years in Lok Sabha before he was defeated in 2019. He won from Wayanad in Kerala from where he had simultaneously contested from.