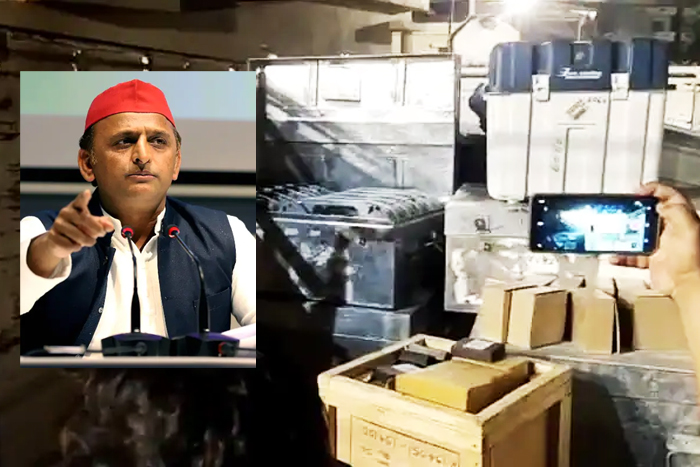 The counting of votes for the mammoth seven-phase elections in Uttrar Pradesh will take place on Thursday.

Samajwadi Party chief Akhilesh Yadav, the biggest challenger to the BJP in the recently held assembly elections in Uttar Pradesh, has alleged that Electronic Voting machines were being stolen from a counting centre in Varanasi just two days before the counting of votes. Accusing the government of “theft”, he pointed out that in 2017, the BJP’s winning margin on nearly 50 seats were less than 5,000 votes.

Later, Mr Sharma also said the vehicle carrying 20 EVMs that was zeroed on by the workers “is here” and can be checked by anyone. “Some people said there were two or three vehicles, but there is CCTV here and all over the campus. Anyone can check that (footage) too, so this matter ends here… These EVMs will not be moved again so that no further controversy is created,” he added.

Appearing before the media, Akhilesh Yadav, however, staunchly countered the claim.

“If there was no suspicious activity, how did two trucks with EVMs escape? You cannot move any EVMs from anywhere without the consent of candidates,” he said.

“We were getting information that a principal Secretary to the Chief Minister was calling District Magistrates, saying ‘counting should be slow wherever the BJP is losing’,” he said, adding, “Now that the EVMs have been caught, the officials will make multiple excuses…”

In the last election, the BJP had won 47 seats with a margin of less than 5,000 votes, the Samajwadi Party chief said. Now that the exit polls are “adding to the perception that the BJP is winning, any theft that may be happening is sidestepped,” he said.

“The news of EVM being caught in Varanasi is giving a message to every assembly of UP to be alert. All candidates and supporters of SP-alliance should be ready with their cameras to thwart the attempt to rigging the counting of votes. Youth become soldiers in counting of votes to protect democracy and future!” he also tweeted.

The Samajwadi Party plans to file a petition in the high court on the issue tomorrow, sources said.

The counting of votes for the mammoth seven-phase elections in Uttar Pradesh will take place on Thursday. The Samajwadi Party has claimed that it will win and form government in the state, where the BJP is hoping for another term in power.

All exit polls, however, have predicted a BJP victory. An aggregate of ten exit polls yesterday indicated that the BJP may win 240-plus of the state’s 403 assembly seats, comfortably above the halfway mark. Akhilesh Yadav’s Samajwadi Party may win 130-plus seats, the exit polls indicated..

Mr Yadav, however, has been positive, tweeting “We are forming government” as the elections ended yesterday.