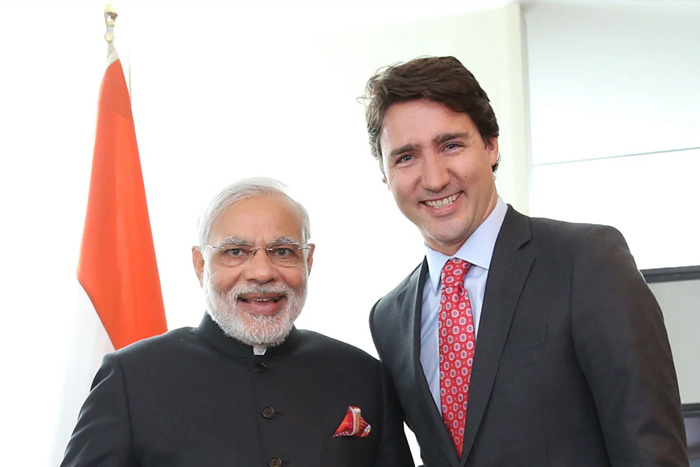 Canada sees China as a disruptive global power fraught with geopolitical risks unlike India which is the largest democracy with shared interests in the Indo-Pacific and addressing global challenges.

The bilateral meeting with PM Trudeau assumes importance in the wake of Sikh radical activity which is trying to polarize the Indian diaspora in Canada by holding so called referendums. While Canada has publicly maintained that it stands for territorial integrity and sovereignty of India, the radical movement is being promoted by dubious Canadian Sikhs with links to Pakistani deep state.

A clear indicator that Canada wants close ties with India is evident from the statement made by Foreign Minister Melanie Jolly on the eve of the G-20 summit. Minister Jolly met External Affairs Minister S. Jaishankar at the just concluded East Asia Summit in Phnom Penh.

Canada ’s Foreign Minister Joly expects India’s leadership and influence to grow further on the global stage and sees the world’s largest democracy as an alternative supply chain to China on the economic front.

“As we consider the rising influence of China, we must also take into account the remarkable trajectory of India, the world’s largest democracy,” Joly said while addressing the Asia Pacific Foundation of Canada in Toronto last week just before leaving for the G20 summit in Bali.

She did not mince any words in issuing a warning that China was a high-risk investment destination for Canada’s business houses.

“As Canada’s top diplomat, my job is to tell you that there are geopolitical risks linked to doing business with the country (China). We will, along with the minister of Trade, my colleague Mary Ng, help you diversify and mitigate risk across the region,” Joly said.

“As India becomes the most populous country in the world, its leadership and influence will only continue to grow, both in the region and globally. With it, so will the opportunity for Canada – including the economic opportunity for Canadian businesses,” she explained.

Joly also said that Canada and India have deep and enduring people-to-people ties. Canadians with family connections to India, and Indians who now call Canada home, enrich our communities, companies, cultural institutions, and campuses. In fact, India is the largest global source of international students coming to Canada, she added.

“We will look for new opportunities to invest in connecting our people. And we will continue to build on our existing partnership to the benefit of citizens in both our countries, based on a commitment to democracy and human rights, common interests in the free and open Indo-Pacific, and collective efforts to address global challenges,” Joly added.

At the same time in a hard-hitting speech, she took Beijing to task.

“China is an increasingly disruptive, global power. It seeks to shape the global environment into one that is more permissive for interests and values that increasingly depart from ours. And China’s rise as a global actor is reshaping the strategic outlook of every state in the region, including Canada,” Joly observed.

She said that Canada would continue to take up the issue of human rights in the Xinjiang region of China and oppose unilateral actions by Beijing that threaten the status quo in the Taiwan Strait.

Joly also said that Canada would “deepen” its economic ties with Taiwan and “continue to stand up for freedom of speech and freedom of the press in Hong Kong.”