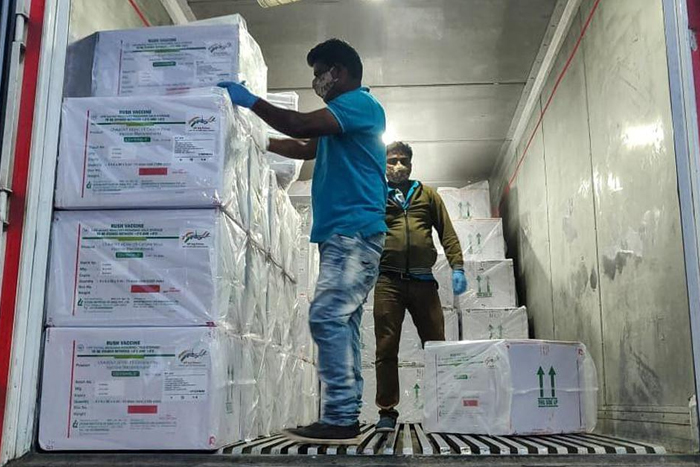 Covishield Vaccine: Thirty crore people will be administered the vaccine in the first phase of the nationwide inoculation drive which will begin on January 16.

The first batches of Covishield, the Serum Institute of India’s coronavirus vaccine, left Pune early this morning for Delhi and 12 other cities, four days ahead of the nationwide inoculation drive against COVID-19.

Amid tight security, three temperature-controlled trucks rolled out of the Serum Institute gates with their precious cargo shortly before 5 am. The trucks carried 478 boxes of the vaccines, each box weighing 32 kg, news agency PTI reported quoting an unnamed official. A ”puja” was performed, along with the traditional breaking of coconuts, before the vehicles headed out of the facility for the Pune airport.

“Ready get set go! Stand by India! The vaccine to kill the disease is being loaded into the aircraft for distribution all over the country now,” Pune airport tweeted.

Ready get set go!
Stand by India!
The vaccine to kill the disease is being loaded onto the aircrafts for distribution all over the country now.@AAI_Official @aairedwr pic.twitter.com/5lY9i4Tjdk

“Civil aviation sector launches yet another momentous mission,” tweeted Aviation Minister Hardeep Singh Puri as the first two flights operated by SpiceJet and GoAir took off with the vaccines to Delhi and Chennai.

Meanwhile, SpiceJet issued a statement saying that it is fully committed and prepared to transport the Covid vaccine both within and outside India.

“We will be carrying multiple vaccine consignments to different Indian cities including Guwahati, Kolkata, Hyderabad, Bhubaneswar, Bengaluru, Patna and Vijayawada through the day today. SpiceJet is fully committed and prepared to transport the Covid vaccine both within and outside India. Today marks the beginning of a long and decisive phase in India’s fight against the pandemic and SpiceJet is proud to assist in the biggest vaccination drive in the history of mankind,” it said.

The vaccines are also being flown out in two cargo flights to Hyderabad, Vijayawada, Kolkata and Guwahati, PTI reported quoting a source.

The consignment for Mumbai will leave by road.

The government has ordered 1.01 crore doses of Covishield and plans to buy a total of 5.60 crore doses by April, at ₹ 200 per dose.

The Hindustan Lifecare Limited or HLL, a Central enterprise, is the agency which will buy the vaccines from both Serum Institute of India and Bharat Biotech.

Two vaccines — the Covishield developed by the Oxford University and pharma major AstraZeneca and Bharat Biotech’s Covaxin — received emergency use approval from the Drug Controller of India earlier this month. Both are two-dose vaccines, which will have to be administered at a 28-day gap.

The rollout of the vaccines has been scheduled for January 16. The government has said that 30 crore people – starting with health workers and frontline workers like the police, civil defence personnel and sanitation workers – will be administered the vaccine in the first phase.

After them, the other vulnerable group, people who are over the age of 50 years and those who suffer from co-morbidities including diabetes and hypertension, will also be administered the vaccine.