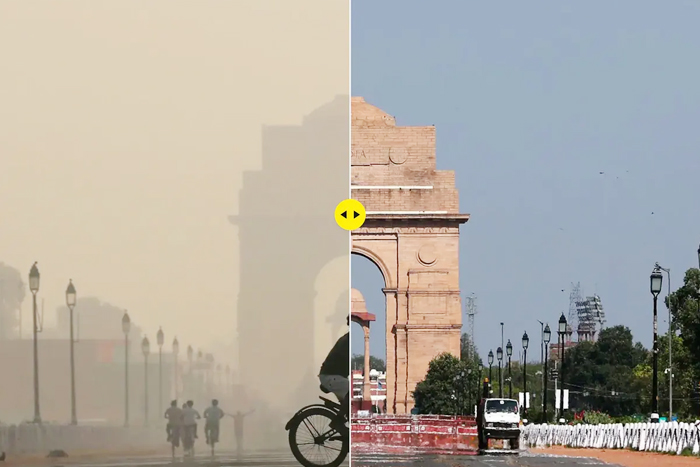 More restrictions were imposed in the national capital on Saturday evening after the air quality index (AQI) slipped into ‘severe’ category. As per an official notification, construction work and demolition activities will be prohibited in Delhi (except for essential projects) till further orders.

“All actions as envisaged under Stage III of the GRAP – ‘Severe’ Air Quality, to be implemented in right earnest by all the agencies concerned, with immediate effect in the NCR,” the official notification read.

According to the Commission for Air Quality Management (CAQM), the Stage 3 of GRAP was implemented due to unfavorable meteorological conditions with slower wind speeds and a sudden spike in farm fire incidents.

“Due to unfavorable meteorological conditions with slower wind speed and sudden spike in the farm fire incidents, it was considered necessary to implement Stage III of GRAP with immediate effect in the entire NCR,” CAQM stated.

The new restrictions are in addition to the restrictive actions mentioned in Stage I and Stage II of GRAP.

CAQM further listed a 9-point action plan as per Stage III of GRAP. This action plan includes steps to be implemented/ ensured by different agencies and Pollution Control Boards of NCR and DPCC.

(i) Introduce different work and off peak timings for travel

Note: The above exemptions shall be further subject to strict compliance of the C&D Waste Management Rules, dust prevention/ control norms including compliance with the directions of the Commission issued from time to time in this regard.

(ii) Other than the projects exempted under (i) above, dust generating/ air pollution causing C&D activities to be strictly banned during this period shall include:
a) Earthwork for excavation and filling including boring & drilling works.
b) All structural construction works including fabrication and welding operations.
c) Demolition works.
d) Loading & unloading of construction materials anywhere within or outside the project sites.
e) Transfer of raw materials either manually or through conveyor belts, including fly ash.
f) Movement of vehicles on unpaved roads.
g) Operation of batching plant.
h) Laying of sewer line, waterline, drainage work and electric cabling by open trench system.
i) Cutting and fixing of tiles, stones and other flooring materials.
j) Grinding activities.
k) Piling work.
l) Water Proofing work.