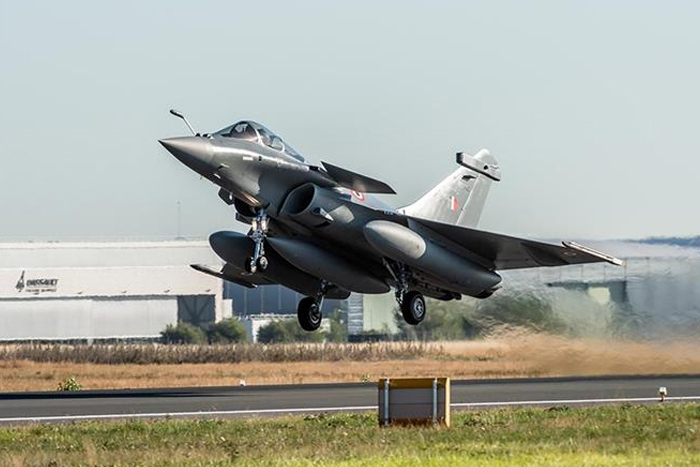 The first batch of the five Rafale figher jets will land in Ambala today to join the Indian Air Force Fleet.

The first batch of Rafale fighter aircraft landed at the Al Dhafra base on Tuesday night as part of an overnight halt. The aircraft, three single-seater and two double-seater, had begun their journey on Monday from the Merignac airbase in the French port city of Bordeaux and will be inducted into the Indian Air Force’s No 17 Squadron, also known as the ‘Golden Arrows’.

10:05 am: People gather on terraces near the Ambala airbase to catch a glimpse of the fighter jets.

Section 144, which prohibits assembly of four or more people, has been imposed in the villages adjoining the Ambala air base, including Dhulkot, Baldev Nagar, Garnala and Panjkhora. Locals have been asked to not fly private drones near the air base or shoot photos and videos.

8:23 am: Rafale fighter jets to be part of India’s oldest airbase in Ambala.

When the first five Rafale jets touch down in Ambala on July 29, they will become a part of the rich history of the Ambala Air Force Station and Golden Arrow Squadron.

8:10 am: Rafale jets could land at Jodhpur airbase if weather over Ambala fails to improve.

Officials have told that with weather conditions over Ambala exhibiting unpredictable behaviour, the IAF airbase in Rajasthan’s Jodhpur has been chosen as a backup for the Rafale aircraft. If weather conditions over Ambala fail to subside, the batch of five aircraft that took flight from Merignac airbase in France on Monday are likely to land and be inducted into the IAF at the airbase in Jodhpur.

8:03 am: Sec 144 CrPC imposed in four villages closer to Ambala airbase. Gathering of people on roofs and photography during landing strictly prohibited.

7.50 am: India Meteorological Department has predicted, “generally cloudy sky with one or two spells of rain or thundershowers” for Ambala today.