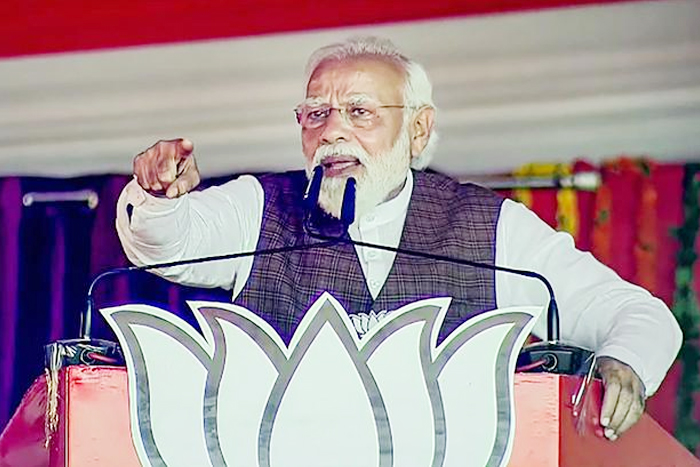 Reacting to the stray cattle menace, which threatens to blunt the BJP’s narrative among farmers this election, Prime Minister Narendra Modi on Sunday promised voters in Uttar Pradesh that after March 10 (election result) a new policy would be introduced to deal with the issue.

Mr. Modi, without giving any specifics, said the government would make the dung (gobar) of stray animals lucrative for the farmer.

Stray cattle also known as anna pashu or chutta janwar enter the fields in herds and not only devour the crops but also trample over large tracts of it.

This causes heavy financial loss to the farmers who have to hold vigil all night on machans to ward off the animals. To tackle the problem, farmers have been forced to put up fences or have barricaded their fields with wires, incurring additional costs.

In many instances, stray bulls have also attacked villagers, prompting the Samajwadi Party to announce that if voted to power it would provide a compensation of ₹5 lakh each to the kin of those who died after being injured by stray bulls. Recently, an aged man died in Mainpuri district after being tossed to the ground by a bull.

SP president Akhilesh Yadav has played up the issue in his campaign and promised to throw out the “baba, bull and bulldozer” government of Chief Minister Yogi Adityanath.

Ground reports suggest that the issue affects farmers cutting across castes. It has become a major talking point among the rural voters.

Addressing a rally in Unnao, Mr. Modi said a new system would be put in place to “get rid” of the the problem.

“I will place such a system before you under which you can derive an income even from gobar [dung] of the animal which does not give milk anymore,” said Mr. Modi.

A day would come when people when they encounter a stray animal would tie it at home thinking that they can also make it a source of income, said the PM.

The Congress party had earlier promised a solution by replicating the Chhattisgarh-model. The party in its election manifesto promised a compensation of ₹3,000 per acre of farm land damaged by stray cattle or other animals. Also, to incentivise cattle rearing and to tackle the menace, it offered to purchase cow dung at ₹2 per kilo from farmers. The model in the Congress–ruled State is known as Godhan Nyay Yojana.