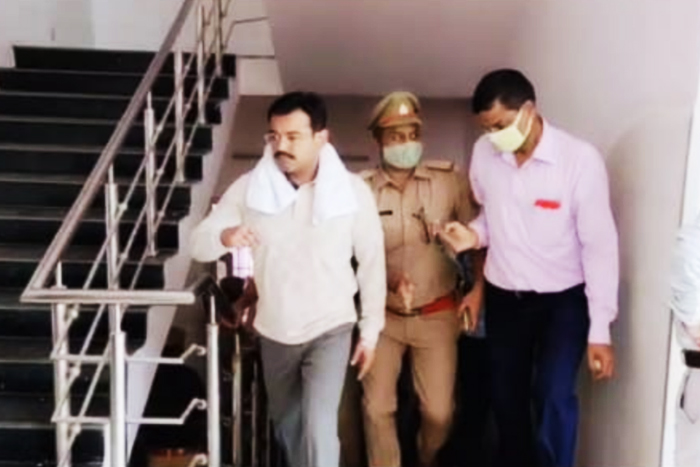 Minister Ajay Mishra’s son back in jail after viral video

LUCKNOW: Ashish Mishra, son of Union minister of state for home Ajay Mishra, has been sent back to jail from the district hospital and will continue his treatment for dengue at its in-house medical facility.

Minister Teni's son #AshishMishra sent back to jail from the district hospital in Uttar Pradesh's #LakhimpurKheri.

He will continue his treatment for dengue at its in-house medical facility. pic.twitter.com/RYQnjjK7w6

This was triggered after a video, which showed him walking around under the custody of jail officials at the district hospital in Lakhimpur Kheri, went viral on social media. In the video, Ashish was not handcuffed and officials maintained their distance in order to let him walk freely, as is often seen in the case of VIPs. Many who saw the video posted on social media that Ashish looked “quite healthy”.

His police custody had abruptly ended a day early after he had fallen sick and tested positive for dengue. Ashish was then remanded to judicial custody. While his counsel wanted him to be transferred to a higher hospital in Lucknow, doctors had said his fluctuating blood sugar and blood pressure could be kept in control in the district hospital itself.
After the video came out and was widely shared, the investigating officer from the special investigation team (SIT) brought the issue to the notice of the chief judicial magistrate (CJM). On Tuesday, CJM Chinta Ram sent separate notices to the jail superintendent and the chief medical officer, asking whether it was possible for Ashish to be treated at the jail hospital. The two will have to reply to the notices by Thursday.

Soon after the notice was delivered to the CMO, Ashish was sent back to jail by the district hospital, which claimed that his condition was now stable and it was possible to treat him inside the jail. A source within the SIT told: “There were videos all over social media showing Ashish walking freely, which could send a wrong message to the public.”
When TOI contacted special prosecution officer S P Yadav to know more about the notice issued by the CJM, he confirmed its existence but refused to comment any further. Jail superintendent P P Singh said, “Ashish was discharged from the district hospital on Tuesday evening and returned to jail at around 7 pm. He was sent to the district hospital to run some tests and the decision to admit him was taken by the doctors there. Currently, his condition is stable inside the jail.”

When questioned about the alleged “VIP treatment” given to him by jail security officers, the superintendent said: “He was not handcuffed as he is not a habitual offender and the police officials were just covering him. There was no VIP treatment given to him. We send all inmates to the district hospital if their treatment is not possible within the jail as we have limited facilities here.”

CMO Shailendra Bhatnagar defended the decision to admit Ashish and said that the call to admit him in the hospital was made by experts who were looking after his treatment. He added that he visited Ashish’s ward and checked his condition. On the CJM’s notice, the CMO said he was yet to receive it and the matter was related to the district hospital, which he claimed came under the chief medical superintendent.