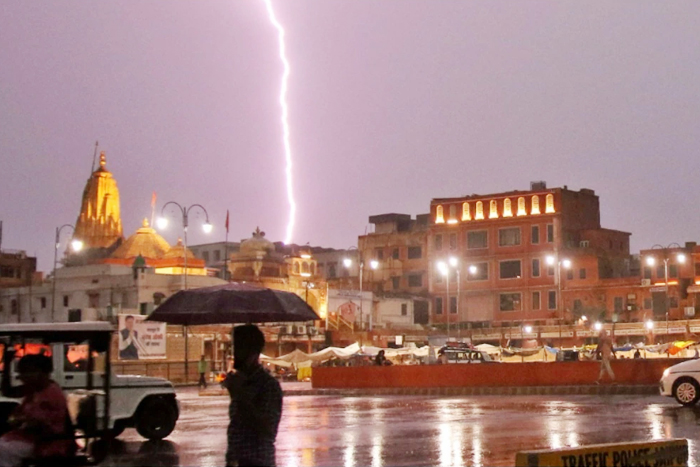 JAIPUR/KOTA: Lightning claimed at least 19 lives across the state on Sunday, including 11 in Jaipur, as the southwest monsoon entered Jaipur, Dholpur, Kota and Jhalawar districts almost three weeks after arriving in Rajasthan on June 18. At least 17 people were injured across the state in rain-related incidents.

Eleven persons were killed and 12 others injured near Amber fort when lightning struck them on Sunday evening. Teams from the State Disaster Response Force (SDRF) and local police immediately swung into action and rushed the injured to the hospital. “So far, 11 persons have been killed in the lightning incident at Amber fort. Majority of the victims are local residents. Also 12 people have been injured. They were sent to the trauma wing of the SMS Hospital,” said city police commissioner Anand Srivastav.

Four children, who worked as shepherds at a village under Kanwas police station area of Kota, and a youth in Sunel area of Jhalawar district were killed due to lightning. In Dholpur’s Bari area, three children were killed after lightning struck.

“The four deceased in Kota have been identified as Radhe Banjara (12), alias Bawla; Pukhraj Banjara (16); Vikram (16) and his brother Akhraj (13). They were killed on the spot while five others sustained burn injuries,” said Kanwas police station SHO Mukesh Tyagi. A 23-year-old shepherd identified as Tara Singh Bheel was killed after lightning struck him while he was grazing cattle in Lalgaun under Sunel police station area of Jhalawar district. In separate incidents at Chachana village of Jhalawar, two minor girls were injured in lightning.

Chief minister Ashok Gehlot condoled the death of children due to lightning in various parts of the state and announced an ex gratia of Rs 5 lakh to the families of the deceased.

In Jaipur, mild to moderate showers started at 4.30pm and covered the whole city by 6.30pm. “It was monsoon rainfall but officially its onset will be announced on Monday as we need to study it. We recorded a rainfall of 69.5mm till 7pm on Sunday,” said Jaipur Met office director Radhey Shyam Sharma.

In its forecast, weathermen said monsoon activities would be seen in many places in eastern and western Rajasthan over the next couple of days.