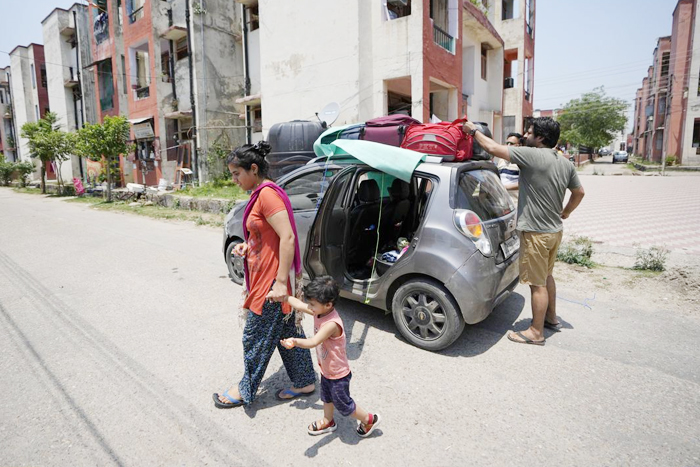 Hundreds of fear-stricken Kashmiri Pandits left the Valley for Hindu-majority Jammu district on Friday even as the Centre turned down their demand of relocation. Amid this, a prominent Pandits’ body, the Kashmiri Pandit Sangharsh Samiti (KPSS), in an open letter to the J&K Chief Justice, sought his intervention to allow frightened Pandits to leave the Valley.

A majority of the 250 Pandit employees living in rented accommodations in Mattan area hired vehicles before sunrise and moved to Jammu district, which is around 290 km away from the Kashmir Valley.

“There is back-to-back killings in the Valley. The killings of a schoolteacher and a bank manager have shattered our faith in the security system. Our only demand is to relocate the employees outside Kashmir till the situation improves. Posting employees to district headquarters won’t help or protect them,” said a protesting Pandit in south Kashmir’s Mattan camp.

The Jagti camp in Jammu, which was set up in the 1990s, received 120 Pandit families from north Kashmir’s Baramulla and Kupwara districts in the past 24 hours.

“The killing of Pandits has not stopped since 1990. In the 1990s, we knew where there was a greater degree of threat to life. This time we are not sure which place is safe,” Sunil, a Pandit employee, said.

One unofficial estimate suggested that over 300 Pandits had reached Jammu in the past two days. However, the government has neither confirmed nor denied the reports of mass migration of Pandits from the Valley.

Meanwhile, Sanjay K. Tickoo, president of the Kashmiri Pandit Sangharsh Samiti, a body of Kashmiri Pandits who did not leave the Valley in the 1990s, has written a letter to the J&K Chief Justice. “Every member of the religious minority is under direct threat from the terrorists operating in Kashmir Valley. The Union Territory and the Central administration have failed to secure their lives. The Kashmiri Pandits and Hindus want to leave Kashmir Valley but the government is not allowing them to leave. Some blue-eyed persons who have access to the power corridors managed the posting of their kith and kin outside the Kashmir Valley,” Mr. Tickoo said in the letter.

He said it was a clear violation of the right to life, which is guaranteed under Article 21 of the Constitution of India, that on the one hand, the administration failed to protect their lives and on the other hand, it does not let them leave the Kashmir Valley so that they can protect their lives.

He demanded an investigation into all the targeted killings in the past eight months in Kashmir. “All the officers and officials whose involvement or lapse is proved in the preliminary allegations should be suspended without any further delay. A Special Investigation Team (SIT) should be constituted to submit its report within a stipulated time and it should be monitored by the High Court,” he added.

The Kashmir Chamber of Commerce and Industry (KCC&I), a prominent body of local businessmen, has termed the bloodshed of innocent civilians “unacceptable and against humanity”. “It goes against the basic spirit and concept of Kashmiriyat. The office-bearers of Kashmir’s largest trade body are deeply shocked and distressed at the killing spree over the past few weeks. This has dented the image of Kashmir again and is against its cultural ethos,” a KCCI spokesman said.