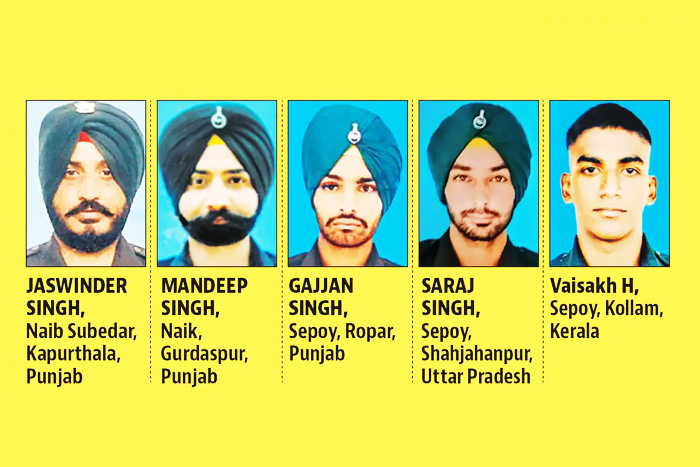 The operation was launched following intelligence inputs about the presence of terrorists in Chamrer forests located near Mughal Road in Surankote sub division of Poonch district in Jammu.

Five soldiers, including a junior commissioned officer (JCO), were killed in an exchange of fire with heavily armed terrorists in a forested area at Surankote in Jammu and Kashmir’s (J&K) Poonch district on Monday amid a spike in violence in the region.

Three other gunfights were reported on Monday in Kashmir — while two terrorists were killed and a policeman was injured in encounters in Anantnag and Bandipora, a gun battle was on till late on Monday in Shopian. The latest casualties are the worst security forces have suffered in anti-insurgency operations in J&K this year.

The exchange of fire in Poonch was triggered during a cordon and search operation that was launched early on Monday morning following intelligence inputs about the presence of around four to five terrorists in the forested area near the Line of Control (LoC), or the de facto border between India and Pakistan, in J&K.

“In ensuing firefight during the ongoing encounter with terrorists, a JCO and four soldiers of Indian Army suffered critical injuries. The critically injured were evacuated to the nearest medical facility but they succumbed to their injuries,” said army spokesperson Lt Col Devender Anand. He added that additional reinforcements have been rushed to the area.

Those killed in the incident were identified as Jaswinder Singh, Mandeep Singh, Gajjan Singh, Saraj Singh and Vaisakh H, the army said.

October, just before the onset of winter, usually sees an increase in infiltration attempts with handlers of the terrorists in Pakistan trying to get more of them into India before traversing the already inhospitable terrain becomes almost impossible.

The last time security forces suffered significant casualties was in May 2020 when five of their personnel, including a Colonel and a Major, were killed in an 18-hour anti-insurgency operation in the Handwara area of Kashmir valley.

In another gun battle, which broke out at Gundjahangir in Bandipora district’s Hajin area, a Lashkar-e-Taiba terrorist was killed. “Killed terrorist has been identified as Imtiyaz Ahmad Dar affiliated with proscribed terror outfit LeT (TRF). He was involved in recent civilian killing at Shahgund Bandipora,” inspector general of police, Kashmir, Vijay Kumar tweeted.

TRF, or The Resistance Front, is an offshoot of LeT that has claimed responsibility for multiple attacks on civilians and minorities in the state in recent days.

Late on Monday, an encounter broke out in the Tulran area of Shopian district of Jammu and Kashmir between terrorists and security forces. The gunfight was on till late on Monday and a video clip showed army jawans asking the terrorists to surrender through an announcement system.

The fresh casualties come after a series of targeted attacks left seven civilians dead in the Valley this month.

Four terrorists associated with the Lashkar-e-Taiba were arrested for the killing of Mohammad Shafi Lone in Kashmir’s Bandipora district, officials said Sunday. At least 500 people have been detained in connection with the string of civilian killings in the Valley, the officials said.

Kashmir has been restive after the murders of seven people, in separate incidents, since October 3. Lone, the president of a taxi drivers’ union in Bandipora, was shot dead on October 5. The Centre has sent Intelligence Bureau’s counter-terror chief Tapan Deka to the Valley to oversee the operations.

Security forces have had exchanges of fire with terrorists in adjoining Rajouri district’s Daddal, Pangai, and Karyote this year after a brief lull in violence amid a decline in infiltration from across the LoC.

J&K Police chief Dilbag Singh said in August that infiltration resumed after a brief lull following a renewed truce deal between the India and Pakistani directors general of military operations (DGMOs) in February. He added that terror camps across the border remained intact.

The DGMOs on February 25 announced the two countries agreed to strictly observe the ceasefire along the LoC.