You are here
Home > DAILY BAWAL > Delhi private liquor shops to close from today, 300 govt vends to take over sale 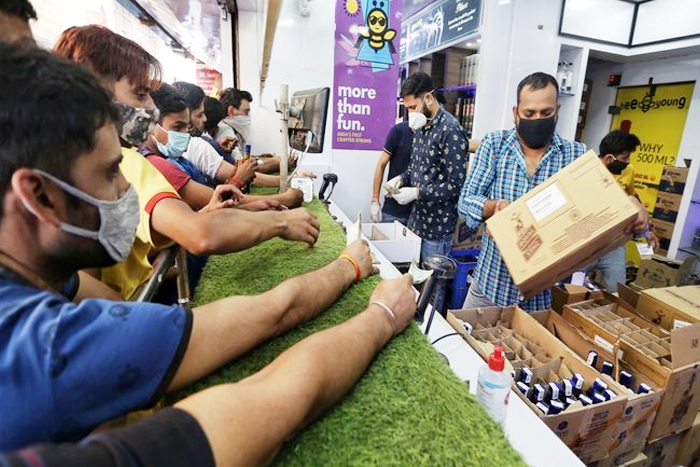 Private liquor shops will be a thing of the past in the capital as they will be replaced by over 300 Delhi government vends from Thursday owing to the switch over from the Excise Policy 2021-22 to the old regime, officials said on Wednesday.

The Excise department had already notified the private licensees that they will not be allowed in retail liquor sale beyond August 31.

People thronged a vend near Welcome Metro station to avail the buy one get one free scheme.

According to officials, the rebates and schemes offered earlier under Excise Policy 2021-22 will not be available as liquor stores will be opened by government undertakings from Thursday.

The six shops at domestic terminal of IGI airport run by private operators will be shut on Thursday, hampering availability. Liquor will be available at duty free shops of the airport, they said.

The Excise Policy 2021-22 was withdrawn by the Delhi government last month, after LG VK Saxena recommended a CBI probe into alleged irregularities in its implementation.

The Excise officials said the liquor supply will improve from first week of September due to opening of more shops.

“Currently, there are nearly 250 private shops that will be replaced by over 300 government vends. So there will be more shops and the number will grow further in the coming days as 500 shops are planned to be opened by four Delhi government undertakings,” said a senior Excise department officer.

Several government vends will be located in malls and near Metro stations.

A mobile app mAbkaridelhi developed by the Excuse department will become operational from September providing consumers information about location of liquor stores in their neighbourhood and shop timings.

The government agencies have also managed to open shops in New Delhi Municipal Council areas after the civic body had earlier rejected a proposal for opening shops there.

The government undertakings have managed to set up liquor stores at rented premises in G Block Connaught Place, Gole Market, Khan Market, Yashwant Place among others, said the officials.

A senior Excise officer said over 360 liquor brands were registered as per the old excise regime that was in operation before November 17, 2021 when the Excise Policy 2021-22 became functional.

However, some liquor traders claimed that many popular brands with large sale volume were yet to be registered by the Excise department.

With Delhi returning back to old excise policy regime, the city will also see the promotion of draught beer. Excise department has also issued licenses to three to four microbreweries that will start working from first week of September, said Excise officials.

“There are plans to promote draught beer by setting up microbreweries in Delhi as there is a significant demand in the segment. More microbreweries will come up in the near future,” an Excise official said.

The government had issued zonal licences to private bidders for 849 liquor vends across the city under the Excise Policy, 2021-22. Nearly half of them had surrendered their licenses in June-July.

Vinod Giri, Director General, Confederation of Indian Alcoholic Beverage Companies (CIABC) said despite best efforts by the authorities and the industry, initial days of going back to the old excise policy is not going to be easy.

On the positive side, many L1 licenses are in place, around 240-260 outlets are likely to start from day one, which will go up to 500 within a month, he said.

“This will impact hotels, pubs, bars and restaurants where such products are popular. Prices will also go back up as discounts are not permitted,” he said.

The switchover of liquor sale to all government retail outlets has led to some unforeseen and unwarranted outcomes, he said.

These are transition pains out of extremely short changeover period. We hope government maintains intensity to resolve these without any delay, he said.