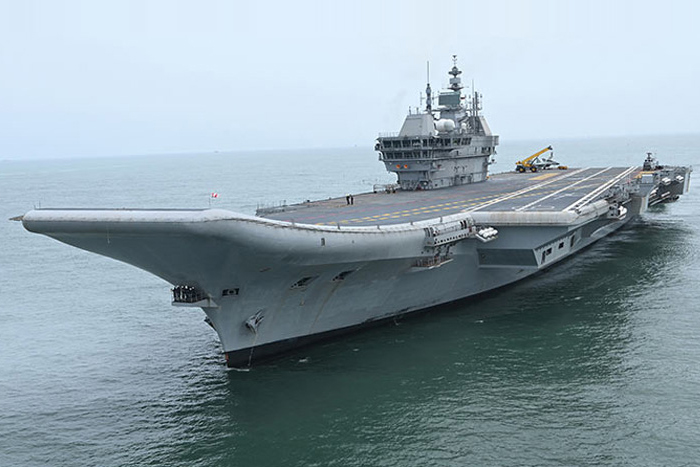 INS Vikrant has been developed with indigenous state-of-the-art automatic equipment built at a cost of Rs 20,000 crore at the Cochin Shipyard.

PM Modi to commission INS Vikrant: Prime Minister Narendra Modi will hand over the first indigenous aircraft carrier ‘INS Vikrant’ to the Navy on Friday. It is the largest ship ever built in the maritime history of India.

INS Vikrant has been developed with indigenous state-of-the-art automatic equipment built at a cost of Rs 20,000 crore at the Cochin Shipyard. During the event, the Prime Minister also unveiled a”new naval flag (mark), which will be in line with the rich Indian maritime heritage, leaving behind the colonial past”.

Tomorrow, 2nd September is a landmark day for India’s efforts to become Aatmanirbhar in the defence sector. The first indigenously designed and built aircraft carrier INS Vikrant will be commissioned. The new Naval Ensign (Nishaan) will also be unveiled.

Why was the warship named Vikrant?

Along with Vikrant, India will have two aircraft carriers in service, which will strengthen the country’s maritime security. Designed by the Warship Design Bureau (WDB), an organization of the Indian Navy, and built by Cochin Shipyard Limited, a public sector shipyard under the Ministry of Ports, Shipping and Waterways, the indigenous aircraft carrier is named after its illustrious predecessor ‘Vikrant’ of India’s first aircraft carrier. Who played an important role in the 1971 war. Vikrant means victorious and brave. The foundation of the Indigenous Aircraft Carrier (IAC) was laid by formal steel cutting in April 2005. A special type of steel is needed to make an aircraft carrier, which is called Warship Grade Steel (WGS).

How was Vikrant built?

Taking forward the indigenization drive, the warship-grade steel required for manufacturing the IAC was successfully manufactured by Steel Authority of India Limited (SAIL) in collaboration with the Defense Research & Development Laboratory (DRDL) and Indian Navy. After this, the ship’s shell (framework) progressed and in February 2009, the construction of the ship’s pathan (nautal, keel) started i.e. the process of building the warship proceeded.

The first phase of shipbuilding was completed in August 2013 with the successful launch of the ship. The 262-m-long and 62-m-wide INS Vikrant can cover a range of 18 nautical miles to 7,500 nautical miles.

The ship has approximately 2,200 rooms, designed for approximately 1,600 crew members. It includes special cabins to accommodate women officers and sailors. The aircraft carrier, designed with a very high degree of automation for machinery operation, ship navigation and survivability, is equipped with state-of-the-art equipment and systems.

It is capable of operating an air wing consisting of 30 aircraft, including indigenously built Advanced Light Helicopters (ALH) and Light Combat Aircraft (LCA) besides MiG-29K fighter jets, Kamov-31 and MH-60R multi-role helicopters. The weight of this vessel is 45,000 tons.