You are here
Home > DAILY BAWAL > 130 killed as bridge collapses in Gujarat, days after reopening 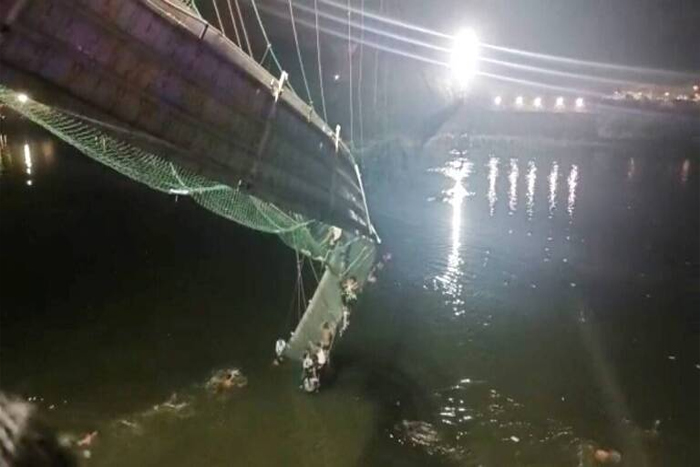 130 killed as bridge collapses in Gujarat, days after reopening

Gujarat CM Bhupendra Patel has announced a compensation of Rs 4 lakh to the families of the deceased, while the PMO has also announced an ex-gratia of Rs 2 lakh from Prime Minister’s National Relief Fund (PMNRF) for them.

The century-old suspension bridge on the Machchhu river in Morbi town of Gujarat, about 240 km from Gandhinagar, collapsed on Sunday evening, officials said. The bridge had re-opened just four days ago, after being closed for about seven months for repair work.

Morbi suspension bridge collapses – many people fall into the river along the bridge. pic.twitter.com/ufAeLOG22P

Chief District Medical Officer of Morbi P K Didhrejiya said at least 60 of the 79 injured people admitted in the Morbi Civil Hospital were in critical condition.

Minister of State for Home Harsh Sanghavi, who rushed to Morbi, said about 150 people were on the bridge at the time of the accident.

According to reports, several women and children were on the “hanging bridge” when it snapped, plunging them into the water below. The incident occurred at about 6:30 pm, when dozens of people were walking on the bridge, a major tourist attraction of Morbi.

“More than 60 bodies have been fished out (by 9:45 pm) and the rescue operation is still in progress. The fire brigade, NDRF (National Disaster Response Force) and private divers are trying to rescue people. Efforts are on to break a check dam downstream so that the water level recedes in the stretch where the bridge stood,” said Mohan Kundariya, the Rajkot MP.

PM @narendramodi has announced an ex-gratia of Rs. 2 lakh from PMNRF for the next of kin of each of those who lost their lives in the mishap in Morbi. The injured would be given Rs. 50,000.

“About 70-80 people were injured or left stranded in the waters of Machchhu after they fell into the river following collapse of the bridge,” said Brijesh Merja, Minister of State for Panchayat and the local MLA from Morbi. “Search and rescue operations are on. The injured are being rushed to government and private hospitals in Morbi,” he said.

While the bridge is owned by the Morbi municipality, the civic body had signed a Memorandum of Understanding (MoU) with Oreva Group, a private firm known for manufacturing clocks, earlier this year, handing over its operations and maintenance for 15 years.

On Sunday, a spokesperson of the Oreva Group said: “While we are waiting for more information, prima facie, the bridge collapsed as too many people in the mid-section of the bridge were trying to sway it from one way to the other”.

Chief Minister Bhupendra Patel announced ex-gratia of Rs 4 lakh for the families of those killed and Rs 50,000 for the injured. He cancelled all his programmes and left for Morbi. “Direct monitoring of the situation and necessary coordination with the system will be achieved by reaching the site in person,” the CM tweeted.

The Prime Minister’s Office announced “an ex-gratia of Rs 2 lakh from PMNRF (Prime Minister National Relief Fund) for the next of kin of each of those who lost their lives in the mishap in Morbi. The injured would be given Rs. 50,000.” Prime Minister Narendra Modi is in Gujarat on a three-day visit.

Meanwhile, the Gujarat government appointed a five-member team of bureaucrats and police officers to probe the bridge collapse.