You are here
Home > DAILY BAWAL > New Shiva Statue In Rajasthan, Said To Be World’s Tallest, Can Withstand 250 kmph Winds 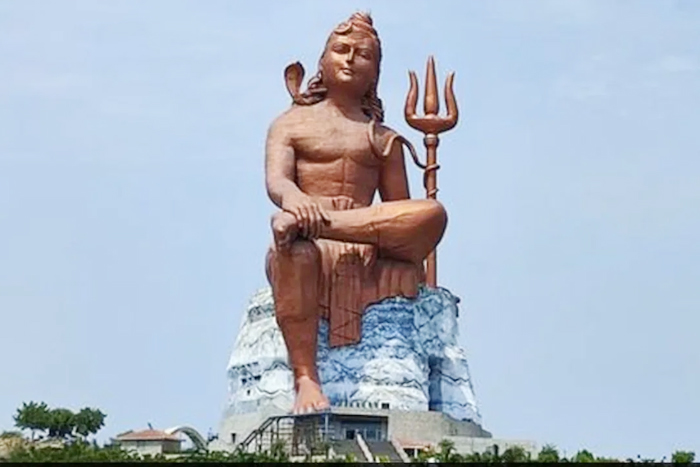 Claimed to be the tallest Shiva statue in the world, it will be opened to the public scriptures preacher Morari Bapu in the presence of Chief Minister Ashok Gehlot, assembly speaker CP Joshi, and others.

Jaipur: The 369-foot-tall Shiva statue ‘Viswas Swaroopam’ installed in Nathdwara town of Rajasthan’s Rajsamand district will be inaugurated on Saturday.

The statue, which is situated 45 kms from Udaipur, has been constructed by Tat Padam Sansthan.

The Sansthan trustee and Miraj group chairman Madan Paliwal said that a series of religious, spiritual, and cultural events will be held for nine days- from October 29 to November 6- after the inauguration of the statue.

“This wonderful statue of Lord Shiva installed in the city of Shreenathji will give a new dimension to religious tourism,” Mr Paliwal said.

Installed on a hilltop over an expanse of 51 bighas, the statue is styled in a posture of meditation, and is said to be visible from 20 kilometers away.

The statue is also clearly visible at night as it has been illuminated with special lights, Jaiprakash Mali, spokesperson for the programme said.

“This is the world’s tallest Shiva idol in which lifts, stairs, and a hall for devotees have been built. There are four lifts and three stairs to go inside,” he said.

Three thousand tonnes of steel and iron, 2.5 lakh cubic tonnes of concrete and sand have been used in its construction, which took 10 years to complete.

Mali said that the statue has been constructed to last 250 years and can withstand wind speed up to 250 kmph.

“Wind tunnel test of the design of this statue has been done in Australia,” he added.

The venue around the statue will host activities like bungee jumping, zip line, and Go-Kart, and will house a food court, adventure park, and a jungle cafe for the tourists to enjoy their day, he added.