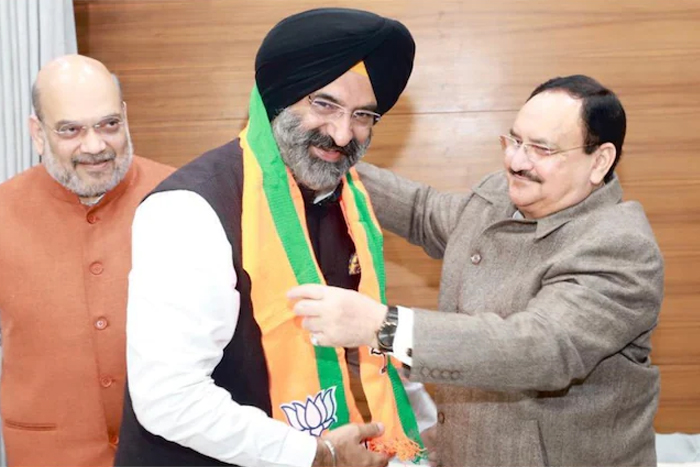 During the year-long farm agitation, many leaders of the BJP called it quits. The BJP’s new strategy is to win the upcoming Punjab polls by wooing prominent Sikh faces on board.

The BJP has been facing an uphill task in Punjab. During the year-long farm agitation, many leaders from the saffron party called it quits, even those who were old members, both Hindus and Sikhs. Despite the setbacks, the BJP has quickly strategised its poll campaign by inducting leaders from Akali Dal.

The BJP’s new strategy is to win Punjab by wooing prominent Sikh faces on board. Since the farm agitation and the PM security breach controversy, the Congress has taken on the BJP alleging an attempt by the saffron party to hurt ‘Punjabiyat’. The state BJP has since then gone into damage control mode, keeping in mind that the incidents are still fresh in public memory.

One of the early joiners was the senior Shiromani Akali Dal (SAD) leader and a popular Sikh face from Delhi, Manjinder Singh Sirsa. He said that he was joining the BJP for the sake of his community.

A Congress leader, on condition of anonymity, called the BJP’s new strategy “poaching of Sikh faces”. The leader stated that the BJP tried similar tactics with the Trinamool Congress in West Bengal and now the same modus operandi is at work in Punjab.

Media advisor of SAD leader Bikram Singh Majithia and spokesperson of the Damdami Taksal, Prof Sarchand Singh told IT why he quit the party.

“SAD is a Sikh party, but over the years, the party has declined. They have lost the trust of the people. And the development of the state will happen if there is Hindu-Sikh brotherhood. And yes, in contrast, the BJP is largely catering to the Hindus but Sikh and Hindu brotherhood is known. And in the sense of secularism, why should Sikhs be left behind?” Sarchand Singh said.

Sarchand Singh found the argument unreasonable when farmers and other parties blamed the BJP-led Centre for the death of farmers during the agitation for the repeal of the farm laws. The farmers died for a cause but it is not reasonable to blame the BJP, he said.

He said that the Sikhs are being honoured by the party. The recent declaration of PM Modi to observe December 26 as “Veer Baal Diwas” was widely condemned by various Sikh bodies including the SGPC. Damdami Taksal a key prominent Sikh organisation, however, hailed the decision.

Damdami Taksal is a Sikh educational organisation and considered a prominent voice on pantheistic issues in the region. Incidentally, it was once headed by Jarnail Singh Bhindranwale, a radical Sikh preacher.

However, Sirsa was quick to defend himself and said, “If members of Damdami Taksal can be in parties like Congress, I don’t see a hue and cry for someone joining BJP.”

Another BJP joinee was Harinder Singh Kahlon, who headed All India Sikh Students Federation and remained one of the most important over-ground leaders of the radical movements in 1980’s. He also faced sedition charges at one point.

The party insiders said that the PM’s security breach issue and the statements given by separatist Khalistani elements may help in attracting the urban voters, mainly Hindus, towards the BJP.

In the past, the SAD has been the senior alliance partner of the BJP. In 2017, the BJP contested just 23 of the 117 Assembly seats. But the party aims to field candidates on as many as 80 Assembly seats this time, a first for the party.

Going by the 2011 census, the Punjabi Hindus make up nearly 38 per cent of the population. A large chunk of Hindus, too, had joined the protest against the farm laws and the BJP is now pinning its hope that the repeal of laws by the Modi government would soften their stance in favour of the party.

Hindu votes swinged in favour of the Congress in the 2017 state polls. But this time, the Aam Aadmi Party (AAP) may also sway Hindu votes as well as the urban voters.

The upcoming polls in Punjab will see a multi-corner contest between the ruling Congress and the AAP in a tug of war. The BJP and its alliance partners would hope that if the mandate is fractured, the smaller parties can then be the kingmakers.