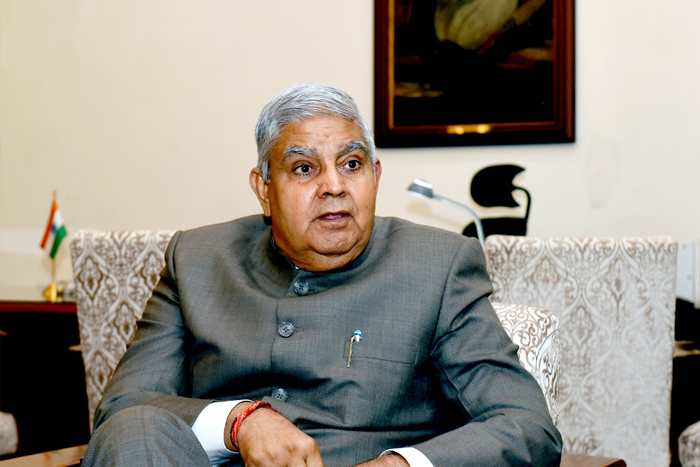 West Bengal governor Jagdeep Dhankhar set to be next vice-president

The victory of Dhankhar, who had acrimonious ties with West Bengal chief minister Mamata Banerjee, is seen as a foregone conclusion as BJP has a majority of its own in the 780-member strong electoral college comprising elected members of the two Houses of Parliament.

“Jagdeep Dhankhar Ji has excellent knowledge of our Constitution. He is also well-versed in legislative affairs. I am sure that he will be an outstanding Chair in the Rajya Sabha and guide the proceedings of the House with the aim of furthering national progress,” he said.

Elevation to the office of the vice-president who is ex-officio chairman of Rajya Sabha, may also appear to be a reciprocal gesture to Jats who in sizeable numbers stood by the party in the Uttar Pradesh polls early this year. The community, with a population share of about 20%, will also be a crucial factor in Rajasthan. The Congress-governed state goes to the polls next year.

Dhankar, who incidentally will the second politician from the Shekhwati region to be the VP after Bhairon Singh Shekhwat, can supplement the support that former CM Vasundhara Raje enjoys among the single-most numerically strong caste.

As Dhankar is set to win, it will be the first occasion when presiding officers in both Houses will be from Rajasthan: Lok Sabha Speaker Om Birla is an MP from Kota.

Dhankar, who served as a minister under Haryana’s Jat stalwart, Chaudhary Devi Lal, is a known name in Haryana. BJP is also in alliance with Dushyant Chautala, the leader of JJP ( Jannayak Janata Party), who is seen by many as Tau Devi Lal’s political heir.

While his spats with Mamata generated headlines, Dhankar is also known for his tact— a quality which helped him become the president of the Rajasthan High Court Bar Association at a relatively young age. He is known for making friends, something that explains his rise in BJP after he crossed over from Congress and which can keep him in good stead in conducting proceedings in Rajya Sabha where opposition benches are not as sparse as in Lok Sabha.