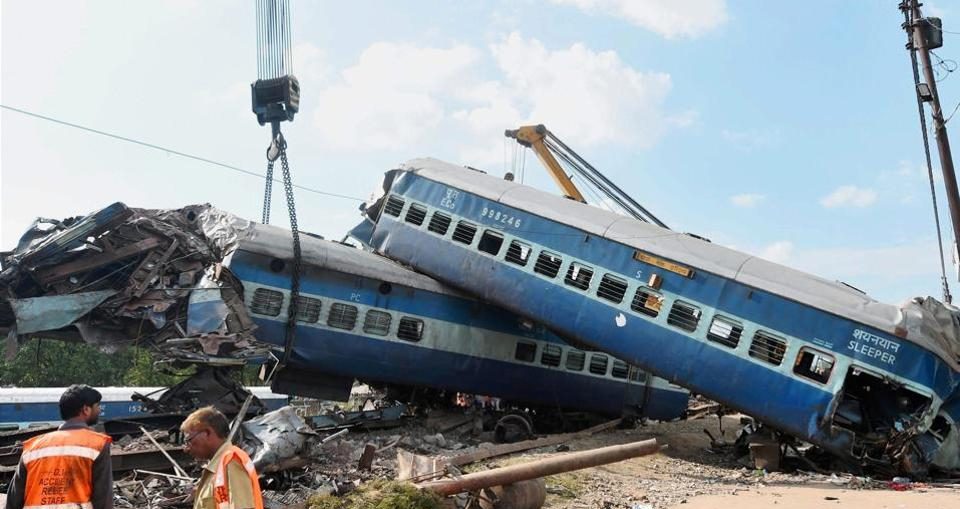 An FIR has been registered against unknown persons in the derailment of Kalinga Utkal Express in Muzaffarnagar district, police said.

Mangled coaches of the Puri-Haridwar Utkal Express being removed from the tracks in Khatauli near Muzaffarnagar on Sunday.

Three top rail officials were on Sunday ordered on leave and another three suspended after a probe report on the Kalinga Utkal Express crash blamed staff’s negligence for the derailment that killed at least 20 people and injured 90.

Fourteen coaches of the express train, which was on way to Haridwar from Puri, went off the tracks on Saturday close to Muzaffarnagar in Uttar Pradesh, with carriages slamming into one another and crashing into a house close by.

“The derailment happened because the track on the right side had been cut by a hexa blade that the permanent way inspectors (PWIs) were using while doing maintenance work,” said a preliminary report that was submitted to the railway board on Sunday.

The findings again shine light on the poor upkeep of the creaking British-era infrastructure that is struggling to keep up with the load of more trains.

Nearly 53% of the 586 train accidents in the last five years were due to derailments, official data says.

The report, a copy of which is with Hindustan Times, said the staff carried out the “unscheduled repair”. Some fish plates and nuts/bolts at the track joints had not been fixed and the gap widened after five coaches passed by at a speed of more than 100km per hour, it said. Fish plates are metal or wooden strips that hold the rails together.

“As time for maintenance works has been shrinking, unscheduled track repairs – or tasks being done without official permission – have become a routine affair,” a ministry official said.

The action against officials came within hours of the submission of the report on the day rail minister Suresh Prabhu said responsibility for the accident would be fixed on the strength of “prima facie” evidence.

This is only the third time in 70 years that action has been taken against senior officials after a train accident.

Muzaffarnagar comes under the northern railways of which Delhi is also a part while the railway board is the top body for administering and managing the world’s fourth largest rail network.

The Modi government, which wants to introduce high-speed trains, is under fire. The opposition has demanded the resignation of Prime Minister Narendra Modi and the rail minister for the “man-made” tragedy.

Modernisation of railways is one of the main promises of the government but investment remains a concern, with the public transporter running huge losses due to low fares and stiff competition from budget airlines.

Mohd Jamshed from the railway board said as much when he spoke to the media earlier in the day. “We did a site inspection. Some track maintenance equipment used for repairs were found at the accident site (apparently left behind by workers),” Jamshed said.

The railway board should empower station masters to order repairs to save time as permissions take too long to come, a ministry official said. “The railways minister has delegated financial powers but he also needs to delegate administrative responsibility,” the official said.

An unverified audio clip, widely shared on social media, of a conversation purportedly between two employees also pointed to negligence.

An official said the ministry was verifying the authenticity of the clip.