You are here
Home > DAILY BAWAL > UP: Thousands of farmers reach Muzaffarnagar for mega rally 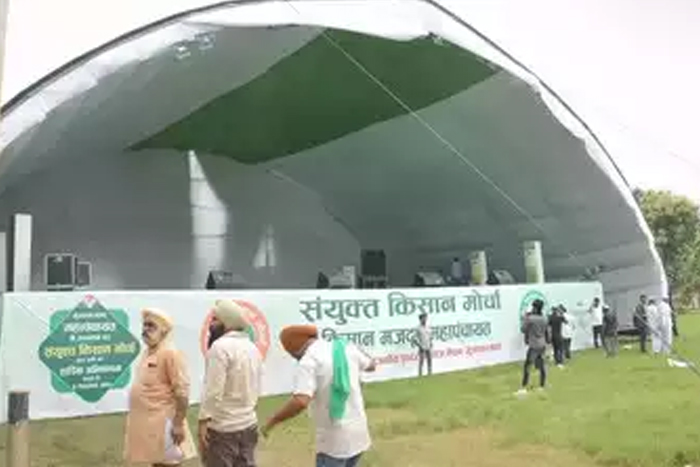 UP: Thousands of farmers reach Muzaffarnagar for mega rally

MUZAFFARNAGAR: Farmers on all kinds of vehicles – from several districts of Uttar Pradesh as well as from other states – began to reach Muzaffarnagar earlier this week for the Kisan Mahapanchayat to be held at GIC Grounds here on Sunday.

On Saturday, more than 10,000 farmers from Agra region managed to dodge the local police and travelled through different routes — particularly the smaller village roads – to reach Muzaffarnagar by the evening. Police and local intelligence officers had been putting pressure on them not to leave for the mega event, they alleged.

Bharatiya Kisan Union (Charuni) Haryana president Gurnam Singh Charuni on Saturday claimed around 1 lakh farmers from the state will attend the mahapanchayat on Sunday. According to Charuni, the farmers’ display of strength will be a fitting response to Haryana chief minister Manohar Lal Khattar’s recent statement that in Haryana, the farmers were “happy” and it is only farmers from Punjab who are protesting.

Meanwhile, Muzaffarnagar’s five main gurdwaras and several others on its outskirts have opened its doors for the farmers arriving in the district. The city’s gurdwaras have started welcoming the farmers and the community representatives began offering their services with langar facilities on Friday. Automatic roti-making machines, that can make 1,000 rotis every hour, have been set up for rolling out the supplies on a mass scale.

Mathura-based BKU member, Gajendra Singh Parihar, said, “Despite the attempts of police to stop us, over 10,000 farmers from different parts of Agra region left for Muzaffarnagar for the mahapanchayat. At least 200 more groups of farmers will travel in the evening. Local heads have been tasked to ensure farmers coming from Madhya Pradesh and Rajasthan do not face any inconvenience while passing through the Agra region.”

Maharashtra-based farmer leader and core committee member of Rashtriya Kisan Mahasangh, Sandeep Gidde Patil, said, “Five hundred farmers associated with different organisations from Vidarbha region have already reached the Singhu border. Besides, 1,000 others from across the state are on their way and will be joining others at the Delhi border. From there, they will travel to Muzaffarnagar early on Sunday”.

Senior farmer leader from West Bengal, Avik Saha, said, “Over 100 groups of farmers from southern states are on their way to Singhu border via trains. They will be leaving for the venue early on Sunday. Buses will take them from Delhi borders.”

Meanwhile, six companies of the provincial armed constabulary (PAC) and two companies of rapid action force (RAF) other than police forces from various districts have been deployed here for the mega event. DIG (Saharanpur range) Preetinder Singh said on Saturday that the event will be videographed while five SSPs, seven ASPs and 40 police inspectors will be posted on the security duty.