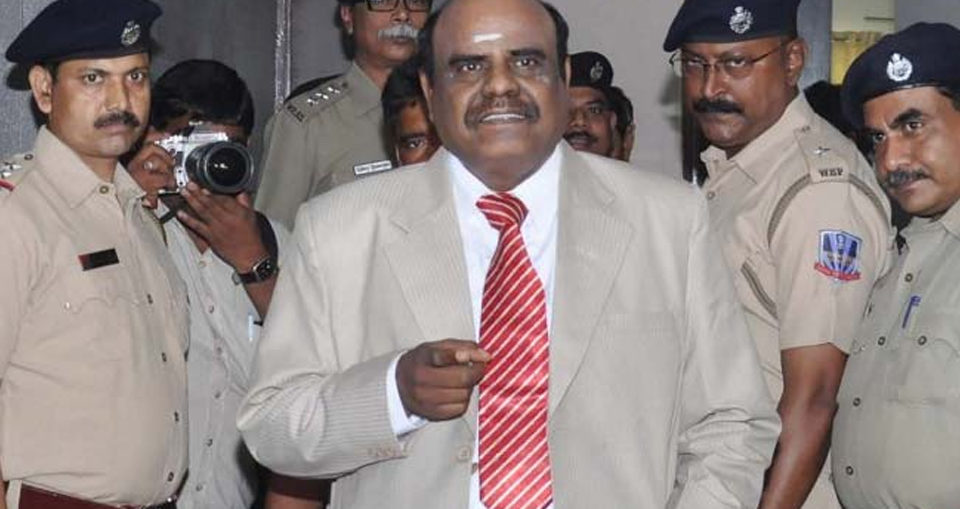 The apex court order by a seven-member bench, which also sentenced Justice Karnan to six months in jail, followed a series of judicial orders he had passed even after being stripped of judicial work.

Calcutta high court judge Justice CS Karnan (C) gestures as he speaks with police personnel in Kolkata on May 4, 2017.

On Monday, Justice Karnan awarded five-year “rigorous imprisonment” to eight Supreme Court judges and imposed a fine of Rs 100,000 on each of them under the Scheduled Castes and Scheduled Tribes (Prevention of Atrocities) Act of 1989 and the amended Act of 2015.

The apex court had earlier asked all courts and tribunals not to take cognizance of any orders issued by Justice Karnan, set to retire in June.

Justice Karnan has taken on the top judiciary after he wrote a letter to Prime Minister Narendra Modi accusing various judges and officers of the Madras High Court of corruption.

The Supreme Court initiated contempt proceedings against Justice Karnan on February 8 and restrained him from performing judicial and administrative work.

In his January letter, he said corruption charges against the judges could be proven if investigated by competent officers of the central agencies. After this, the Supreme Court issued a warrant on March 10 against Justice Karnan.

He appeared before the Supreme Court on March 31 — becoming the first high court judge to do so in Indian judicial history. The judge continued his tirade against the Supreme Court judges, accusing them of caste bias. The Supreme Court then called for a medical examination of Justice Karnan. He refused to undergo the test, saying he was of sound mind.