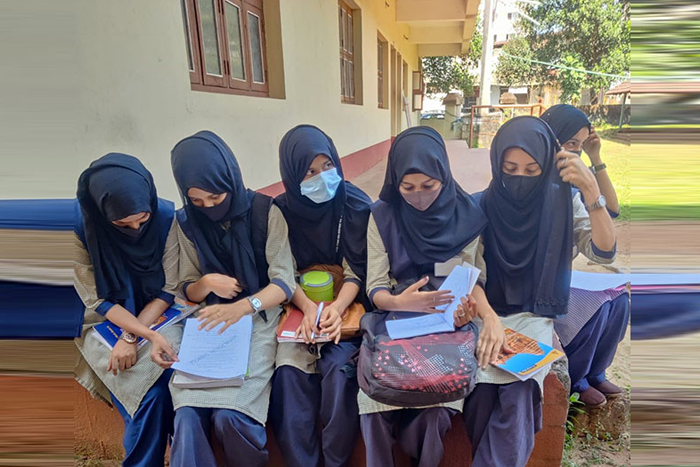 But one trend is unquestioned: as with girls of other faiths, there has been a steady increase in the number of Muslim girls going to schools and colleges in Karnataka — and, indeed, across the country.

Their numbers, as a share of their population, are still lower than that of non-Muslims but the uptick is significant and steady, show several government surveys.

Between 2007-08 and 2017-18, the Gross Attendance Ratio (GAR) of Muslim women in higher education in India increased from 6.7 per cent to 13.5 per cent, according to a unit-level data analysis of the 64th and 75th rounds of the National Sample Survey (NSS) by Khalid Khan of the Indian Institute of Dalit Studies.

A review of school data also shows that more girls from the community are accessing education today than ever.

According to Unified District Information System for Education (UDISE) data on elementary and secondary education, nationally, the share of Muslim enrolment to total enrolment of girls in upper primary (Class 5 to 8) has risen from 13.30 per cent in 2015-16 to 14.54. In Karnataka, it rose from 15.16 per cent to 15.81 per cent.

For Afeeda KT, who teaches sociology at Mount Carmel College in Bengaluru, more Muslim girls in schools and colleges are “hard-earned gains that need to be sustained.”

“The hijab row clearly extends the political targeting of the Muslim community by Hindutva forces,” said Afeeda. “If we look at its impact on Muslim women’s higher education, it’s early to predict. But it will influence life choices, especially for women who also have to tackle the embedded patriarchal system in this country.”

More so, for Muslim girls and women. Khan, who has studied the GAR data, said that restricting young women from attending colleges based on their attire will push them back to the “same patriarchal trap which the Karnataka government thinks to remove”.

“One may think that wearing a scarf is a patriarchal imposition of the dress over the body of a girl. In such circumstances also, the entry of Muslim women with scarf is the only way to address this problem. If they are wearing a scarf under the pressure from their family and the society, they will remove it once they find themselves economically independent after getting higher education,” said Khan.

Former Planning Commission Secretary N C Saxena said he is concerned over the hard lines in the current debate. “Equal bias does unequal harm. Muslim women have a moral and legal right to wear hijab but it’s a bad strategy because it will lead to further polarisation and bias outside the community which will affect them in many ways. It will further widen the gap,” Saxena said.

Going to schools or colleges is what will empower the girls, said Poonam Batra, a professor of Education at Delhi University. “It’s education which can enable young women to understand how a hijab or a ghunghat are symbols of patriarchy. So what is regressive here, is to deny them an education in the name of adhering to rules of school uniform. The agenda is to invisibilise Muslims further,” Batra said.