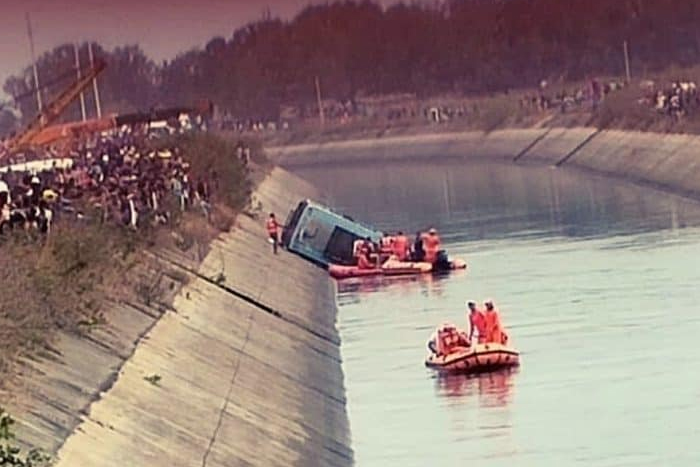 BHOPAL: At least 47 people were killed when a packed passenger bus veered off the road and plunged into a canal in Madhya Pradesh’s Sidhi district on Tuesday morning. Most of the victims were found dead in their seats.

The suddenness of the crash left a slim window of survival — only six passengers could get out alive. Four are reported missing. This is the worst road accident in MP in terms of toll. Twenty of those killed are women — most of them were going to attend an auxiliary-nurse-midwife exam in Satna. The other victims were their companions, mostly brothers and fathers. Two children are among the dead.

PM @narendramodi has approved an ex-gratia of Rs. 2 lakh each from Prime Minister’s National Relief Fund for the next of kin of those who have lost their lives due to the bus accident in Sidhi, Madhya Pradesh. Rs. 50,000 would be given to those seriously injured.

Prime Minister Narendra Modi, home minister Amit Shah, CM Shivraj Singh Chouhan and former CM Kamal Nath have expressed grief over the tragedy. Chouhan announced a compensation of Rs 5 lakh to the families of each of the dead. They will also get Rs 2 lakh each from PM’s Relief Fund. The bus had left Sidhi around 5.30am, with 38-40 passengers. More boarded on the way. It’s believed there were at least 57 on board when the bus crashed.

The bodies of 4 victims, including the driver, are yet to be found.

The normal route is via NH39. The driver, who is yet to be found, took an alternative route along Banganga canal because the ghat roads lead to daily bottlenecks. Near Patna village in Rampur Naikin region, the bus drove headlong into the canal at 8.20am. The passengers got no warning and no time to react.

It’s not yet known why the driver lost control because the bus crashed on a straight stretch of canalside road. Some say he tried to give way to another vehicle and had miscalculated his distance from the edge. Some of those sitting near the window got sucked out as the bus sank to the canal bed. They are the only ones who have survived.

“The driver jumped off as soon as the bus flew into the canal. It overturned in the water and began sinking from the driver’s side,” said Vibha Prajapati, 21, a survivor.

Sidhi collector Ravindra Chowdhary said 47 bodies have been found — 20 women, 25 men and 2 children. CM Chouhan sent two ministers to the spot. Search and rescue operations were still on when this report was filed.