You are here
Home > DAILY BAWAL > Red alert, total curfew: What will happen under GRAP if Delhi’s Covid positivity crosses 5% 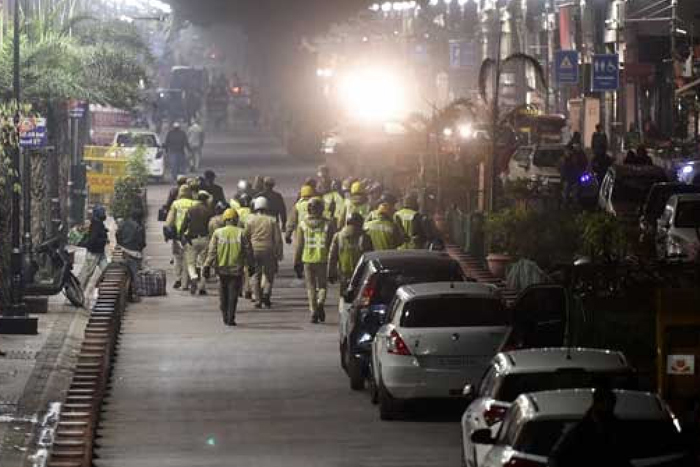 On Sunday, the city reported 3,194 new Covid-19 cases, up from 2,716 cases reported a day earlier. Delhi’s active cases increased to 8,397 on Sunday from 6,360 recorded until a day before, according to the government’s daily health bulletin.

National capital Delhi has been witnessing a large number of coronavirus disease (Covid-19) cases over the past few weeks. The surge has been reported after the emergence of the Omicron variant, which has a high transmissibility rate and is believed to be more resistant to existing vaccines.

The Aam Aadmi Party (AAP) government implemented measure of the Graded Response Action Plan (GRAP) after the positivity rate crossed 0.5 per cent and stayed above it for two days. Under this, the capital was put under yellow alert – the first level or restrictions – which led to night curfew, closing of schools, colleges, movie theatres and gyms.

But there is increased concern about further spike in the positivity rate due to rising number of Covid-19 cases. It currently stands at 4.59 per cent.

What will happen if the positivity rate goes beyond 5 per cent?

According to GRAP prepared by the government, if Covid-19 positivity rate crosses the five per cent mark and stays above it for two consecutive days, Delhi will be put under ‘Red’ alert.

This means that there would be total curfew – night as well as weekend – on movement of people. However, there will be certain exemptions based on the categories decided by the government.

Shops and establishments dealing with non-essential goods and services will be closed. Malls and weekly markets will also be shut down.

While cinema halls, banquets, spas, yoga institutes are already closed under the current yellow alert, barber shops and beauty salons too will be asked to down their shutters.

The government offices too will be closed, except those providing essential and emergency services. Such establishments will be allowed to remain open with 100 per cent staff attendance, according to GRAP. Same will be applicable for private offices.

The limitation on gatherings for weddings and funerals will be further brought down to 15, from the current 20.

The GRAP norms will also lead to closure of most other places, as well as Delhi Metro, which is currently operating with 50 per cent capacity.

On Sunday, the city reported 3,194 new Covid-19 cases, up from 2,716 cases reported a day earlier. Delhi’s active cases increased to 8,397 on Sunday from 6,360 recorded until a day before, according to the government’s daily health bulletin. Sunday’s tally was the highest single-day rise in since May 20.

Chief minister Arvind Kejriwal, however, said that there is no need to panic because most of the cases are mild or asymptomatic.