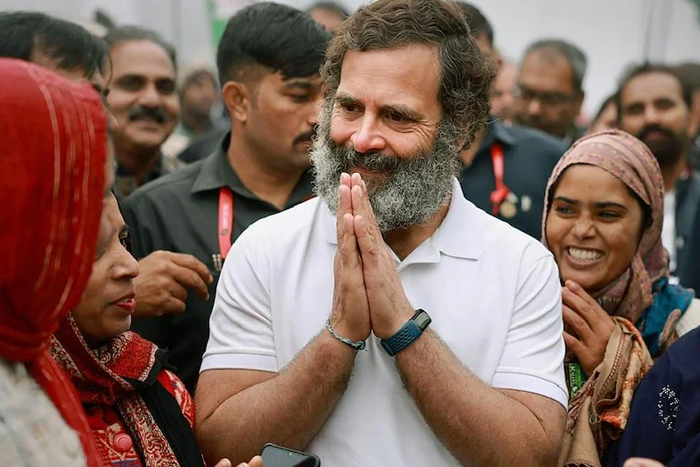 While addressing party workers and leaders, Rahul Gandhi reiterated that the motive of his yatra is to open a ‘mohabbat ki dukaan‘ (shop of love) amid an existing ‘nafrat ka bazaar‘ (market of hate).

While addressing party workers and leaders, he reiterated that the motive of his yatra is to open a ‘mohabbat ki dukaan’ (shop of love) amid a ‘nafrat ka bazaar’ (market of hatred).

“Common man of the country is now talking about love. In every state, lakhs have joined the yatra. I have told people of RSS and BJP that we are here to open shop of love in your ‘bazar’ of hatred,” Mr Gandhi said.

In his clapback, Mr Gandhi cited PM Narendra Modi’s recent poll campaign in Gujarat and the BJP’s “Jan Aakrosh Yatra” in Rajasthan. “The BJP is taking out yatras in various states. But the Health Minister is sending letter only to us,” he said.

Congress had alleged that the BJP wanted to stop Mr Gandhi’s yatra as it is scared of the love Bharat Jodo Yatra has received.

Today’s yatra will make its morning halt at Ashram chowk at 11 am and will resume its journey at 1 pm. After traversing through Mathura road, India Gate and ITO, it will conclude at the Red Fort.

The yatra, which completed 100 days on December 16, will take a nine-day year-end break and will again resume on January 3 from Delhi.

The Delhi Police have released a traffic advisory asking commuters to avoid certain routes and make “maximum use” of public transport. The traffic, says the advisory, is expected to remain heavy from Badarpur to Red Fort.

“There will be graded and dynamic diversion to ensure smooth traffic management and facilitate commuters while ensuring safety of pedestrians on roads,” said the advisory.