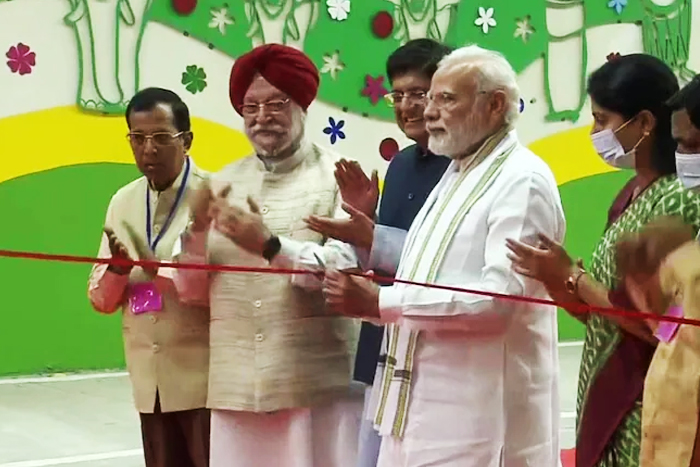 The Pragati Maidan Integrated Transit Corridor project is set to bring big relief to Delhiites from traffic. PM Modi will dedicate the main tunnel and five underpasses to nation on Sunday, June 19.

According to the government, the impact of the project will be much beyond Pragati Maidan as it will ensure hassle-free vehicular movement, helping save time and cost for commuters in a big way. It is part of the overarching vision of the government to ensure ease of living for people through transforming urban infrastructure.

“The main tunnel of the corridor connects Ring Road with India Gate via Purana Qila Road, passing through Pragati Maidan. The six-lane divided Tunnel has multiple purposes, including access to the huge basement parking of Pragati Maidan,” the government said in a statement.

Why was this corridor required?

Advocate Bibhuti Bhushan Mishra, a daily commuter on this stretch, dubbed the traffic here as never-ending.

He said, “It appeared that the construction work being carried out at Pragati Maidan would take thousands of years to complete. The traffic on the road appeared never-ending and would pose a serious challenge, on a daily basis, for advocates like us to reach for the court hearings on time. However, now that the project has reached completion, I hope this crisis will be over.”

As per a report submitted to the Delhi government’s PWD department, there were frequent bottlenecks on Ring Road, Mathura Road and Bhairon Marg.

The intersections and fast development in adjoining centres such as Ghaziabad, Noida, NCR region increased the vehicular trips on these three roads. The traffic load further increased due to the Delhi-Mathura Expressway.

The traffic on the surrounding road networks of India gate and the ITPO Pragati Maidan area is expected to witness further surge due to the fast development of residential townships in Noida and Greater Noida, Ghaziabad and in East Delhi.

Importantly, as per one of the reports shared with the PWD department, the majority of traffic coming from the East side of the River Yamuna and passing through Bhairon Marg and its surrounding road networks are for Gurgaon or Central Delhi. Hence, this passable traffic was responsible for a large share of the congestion. It means construction of this six-lane corridor, the traffic congestion on the road will reduce.

“A unique component of the tunnel is that two cross tunnels below the main tunnel road have been constructed in order to facilitate movement of traffic from either side of the parking lot. It is equipped with the latest global standard facilities for smooth movement of traffic, such as smart fire management, modern ventilation, and automated drainage, digitally controlled CCTV and public announcement systems inside the tunnel,” the government said in a statement.

“This long-awaited tunnel will serve as an alternative route to Bhairon Marg, which is running much beyond its carriage capacity and is expected to take more than half of the traffic load of Bhairon Marg,” it added.

No traffic congestion for at least ten years

As per experts, the corridor will ease traffic on these road networks for at least a period of ten years. This would mean savings of productive time, less vehicular emissions and less expense on fuel. It is going to give a sigh of relief to the Pragati Maidan visitors as well as the ITO commuters.

The Centre Road Research Institute experts said that this project was long pending and it would provide seamless traffic.

“Mainly the traffic on Ring Road, Zakir Hussain Road and Mathura Road would become seamless. Over several years, many deadlines were crossed. It is very useful for the Pragati Maidan visitors as well as ITO visitors,” K Ravinder, principal scientist at the CSIR- CRRI, told us.

The CRRI had given technical suggestions at the time of the construction of the corridor and specifically for the underpass directly leading to Pragati Maidan.

“Normally, any such project decongests the traffic for fifteen to twenty years. But if the traffic growth is high, within ten years it reaches its peak,” the scientist said.

As per an IIT Madras study, the traffic congestion on Delhi roads costs around Rs 65,000 crore annually. This annual loss was calculated by keeping an account of fuel waste due to traffic jams, productivity loss, air pollution and road accidents. As the vehicular population in the Delhi-NCR continues to grow at a rapid speed, the study suggested that the traffic congestion would further increase and losses would be around Rs 98,000 crore by 2030 if steps to tackle the crisis are not taken on time.

According to him, nearly 30 minutes of travel time will be saved by each vehicle. And the traffic on that stretch is around 2 lakh to 2.5 lakh vehicles in 24 hours.

“So we can calculate the travel time saved and the fuel economy saved in total every day,” he said. This also means a reduction in the vehicular emissions caused due to traffic jams.