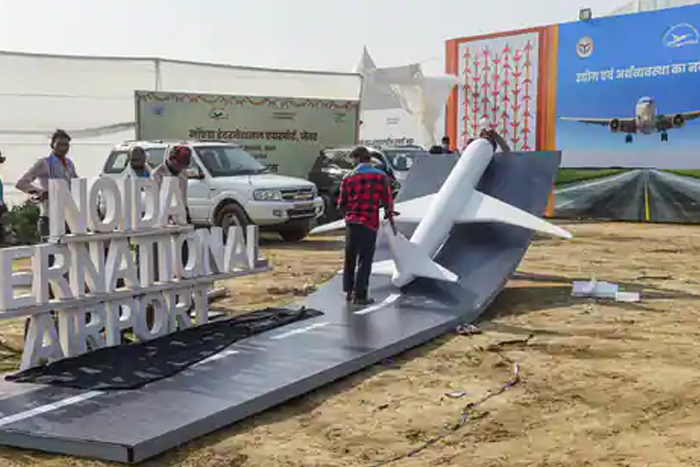 Jewar Airport: Located at a distance of about 72 km from the IGI airport in New Delhi, the new airport will be India’s largest after its completion, according to officials. The first phase of the development of the airport is being done at a cost of over Rs 10,050 crore.

Prime Minister Narendra Modi is set to lay the foundation stone of the Noida International Airport (NIA) in Jewar, Gautam Buddha Nagar on Thursday. With this, Uttar Pradesh will become the only state in India to have five international airports.

Located at a distance of about 72 km from the IGI airport in New Delhi, the new airport will be India’s largest after its completion, according to officials. The first phase of the development of the airport is being done at a cost of over Rs 10,050 crore.

The foundation stone of the new airport will be laid by PM Modi at 1 PM on Thursday.

So, what do we know about the Jewar International airport?

Spread over more than 1,300 hectares of land, the airport will be the second international airport to come up in Delhi-NCR.

The first phase of the airport is scheduled to be completed by 2024 and will have the capacity to serve around 1.2 crore passengers a year. The airport will expand to serve 70 million passengers by the end of phase 4, depending on passenger growth and traffic.

In stage 1, there will be a two runways airport of 1,334 hectares for which an agreement has been signed. In the following stage, the third runway in a 1,365-hectare area will come up for which land acquisition is under process. The 4th runway is on a 1,318-hectare area while a 5th runway has been proposed in the second stage.

It will be executed by international bidder Zurich Airport International AG as concessionaire, PTI reported. According to officials, groundwork for the first phase has been completed already.

It will also be India’s first net zero emissions airport. According to officials, land has been earmarked to be developed as a forest park using trees from the project site.

Where is the Jewar Airport located?

The airport is located in Jewar, Gautam Buddha Nagar. Once constructed, the airport is likely to help decongest the Indira Gandhi International Airport in New Delhi.

According to a statement released by the Prime Minister’s Office, the airport is strategically located and will serve the people of cities including Delhi, Noida, Ghaziabad, Aligarh, Agra, Faridabad and neighbouring areas.

The airport is “set to be the logistics gateway of northern India and will help establish UP on the global logistics map,” the PMO said.

On Tuesday, Chief Minister Yogi Adityanath came to the Jewar site to review preparations, ahead of PM Modi’s visit for the foundation stone laying ceremony of the airport.

The CM said the state is working on airports in areas where people could not have “imagined” earlier. He said the airport will bring 1 lakh jobs, and that many other projects like Film City, Electronic Park are coming up in the region.