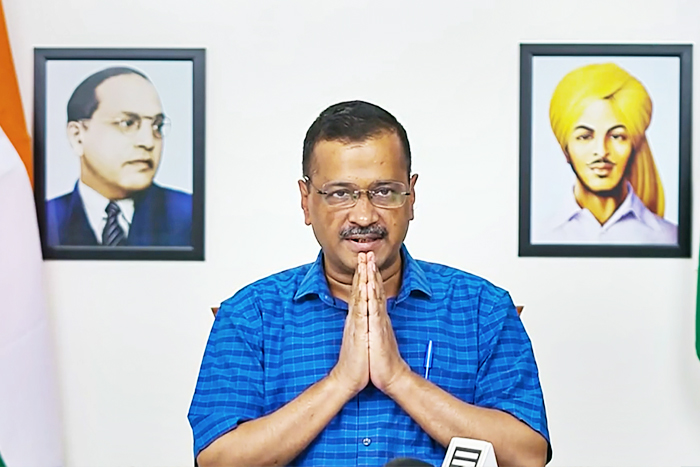 Without mentioning the CBI probe demand, Mr Kejriwal trained his guns at the Centre alleging Aam Aadmi Party leaders are being framed in made up cases to stop them from working.

In an online press briefing, Mr Kejriwal also said that he has known Mr Sisodia for 22 years and he is a “hardcore honest” man. “I came to know that a case has been sent to the CBI against Manish Sisodia and they are going to arrest him in a few days. It is a completely fake case. There is not even an iota of truth in this case,” he said.

Mr Saxena today recommended an investigation by probe agency Central Bureau of Investigation into the Delhi government’s contentious new excise policy. Citing a report by the Chief Secretary, he said the Minister In-charge of the excise department, Manish Sisodia, was involved in corruption and worked to benefit liquor barons causing massive losses to the exchequer.

BJP leaders have welcomed the LG’s suggestion, saying they have also been demanding a probe into the policy. In a press conference by the party, Union Minister and BJP leader Meenakshi Lekhi attacked Mr Kejriwal, asking him a set of questions “before he gave himself certificates of honesty”. She said the Delhi government enacted the liquor policy illegally and it is a “fraud on the people of the national capital”.

Without mentioning the CBI probe demand, Mr Kejriwal trained his guns at the Centre alleging that Aam Aadmi Party leaders are being framed in made up cases to stop them from working.

“The new rule in India seems to be that first it is decided who has to be jailed and then that person is tagetted relentlessly with all sorts of fabricated findings and lies,” he said in a jibe at the Centre. Several opposition parties have accused PM Modi-led government of using investigating agencies for politival vendetta.

Calling BJP leaders “children of Savarkar”, he said his party leaders were the children of freedom fighter Bhagat Singh who refused to bow down before the British and chose to be hung to death instead. “We are not afraid of going to jail,” he said.

Mr Kejriwal stressed that it was the popularity and electoral success of AAP because of their Delhi model of development which scared the Centre because of which they keep attacking the party and imprison their MLAs.

Earlier this week, the Lieutenant Governor had blocked Chief Minister Arvind Kejriwal’s Singapore visit. The party had hit back, with Mr Sisodia terming the move “mean politics” at work.

Mr Kejriwal was invited for the “World Cities Summit” back in June by Singapore High Commissioner Simon Wong. He is expected to address the meet on August 1.