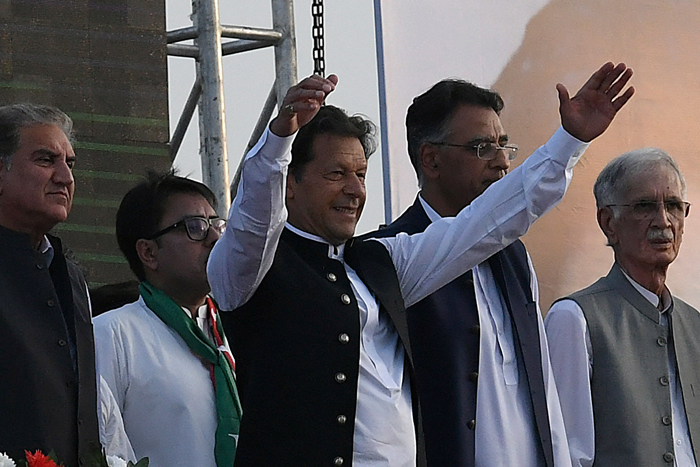 Pakistan’s beleaguered Prime Minister Imran Khan bowled a yorker at his rivals on Sunday by getting the presidential nod for the dissolution of Parliament, a move dubbed “unconstitutional” by the Opposition parties. The latter have approached the Supreme Court to challenge the decision.

Chief Justice Bandial observed that public order must be maintained and no state functionary shall take any “extra-constitutional” steps in the prevailing political situation, adding that all orders and actions initiated by the Prime Minister and the President regarding the dissolution of the National Assembly will be subject to the court’s order. The top court adjourned the hearing till Monday.

The stunned Opposition termed the entire process unconstitutional and its lawmakers refused to leave the premises of the Parliament House which was protected by security personnel.

Mr. Khan was widely expected to lose the no-confidence motion moved by an alliance of Opposition politicians in the National Assembly — including more than a dozen defectors from his own political party.

Mr. Khan, who had effectively lost majority in the 342-member National Assembly, made a brief address to the nation in which he said he has recommended dissolution of the House and sought fresh elections. He congratulated the nation for the no-trust motion being dismissed, saying the Deputy Speaker had “rejected the attempt of changing the regime [and] the foreign conspiracy”.

Mr. Khan said he has advised President Alvi to dissolve the National Assembly. Pakistani media reported that general elections would be held within 90 days. “Prepare for elections. No corrupt forces will decide what the future of the country will be. When the assemblies will be dissolved, the procedure for the next elections and the caretaker government will begin,” Mr. Khan said.

Later, President Arif Alvi’s office said he has dissolved the National Assembly according to the advice of the Prime Minister.

A close aide of Mr. Khan and former information minister Fawad Chaudhry tweeted that the federal cabinet has also been dissolved. However, Mr. Khan will continue working as interim prime minister.

“We are going to challenge the ruling by the Deputy Speaker and advice by the Prime Minister to dissolve parliament in the Supreme Court,” said Shehbaz Sharif, Leader of the Opposition in Parliament.

Former Pakistan prime minister Nawaz Sharif said Mr. Khan and all others involved in the “conspiracy” against the nation are guilty of high treason and should be tried for desecrating the Constitution.

“What Imran Khan has done is against the laws. We’re approaching our lawyers. The Speaker has also done an undemocratic work. Imran Khan has exposed himself through this move. He is fleeing against the no-trust motion seeing defeat,” Pakistan Peoples Party Chairman Bilawal Bhutto Zardari said.

“We call on ALL institutions to protect, uphold, defend & implement the constitution of Pakistan,” he later tweeted.

Pakistan’s powerful army said it has “absolutely nothing” to do with the prevailing political situation in the country. Military spokesman Maj. Gen. Babar Iftikhar made the remarks in the wake of rejection of a no-confidence motion and subsequent dissolution of the National Assembly by the President.

“The army has absolutely nothing to do with what happened in the National Assembly today,” Maj. Gen. Iftikhar said.

The powerful Pakistan Army, which has ruled the coup-prone country for more than half of its 73 plus years of existence, has hitherto wielded considerable power in the matters of security and foreign policy.

Chief Justice Bandial arrived at the apex court, which was especially opened on a Sunday following the day’s dramatic turn of events. The top judge has taken suo motu notice of the current situation in the country, the spokesperson of the apex court said.

The joint Opposition has prepared a petition to cancel the ruling of Deputy Speaker Suri.

Leading constitutional lawyer Salman Akram Raja said that the “entire procure by the deputy speaker and the advice by the premier to dissolve the assembly was unconstitutional”.

He said that the Supreme Court would decide the entire controversy.

Raja said the illegality of the ruling would also make the advice as illegal as the prime minister cannot give advice to the assembly after a no-confidence motion was presented in parliament against him.

Ahsan Bhoon, President Supreme Court Bar, said the action of the prime minister and deputy speaker was against the Constitution and “they should be prosecuted for treason under Article 6 of the Constitution.” He appealed to the chief justice to take a suo moto action against the gross illegality.

The combined opposition filed the no-confidence motion on March 8 against Khan for mismanaging the economy. Khan has rejected the charges and went on to allege that he was being targeted by a “foreign conspiracy” with the collaboration of top Opposition leaders.

Khan later told PTI leaders that the Opposition parties seemed ‘taken aback’ after the National Assembly deputy speaker blocked their move to overthrow his government through a no-confidence vote.

“I want to remind you all that I told you yesterday evening that don’t panic… the Opposition still wondering as to what happened to them,” he said.