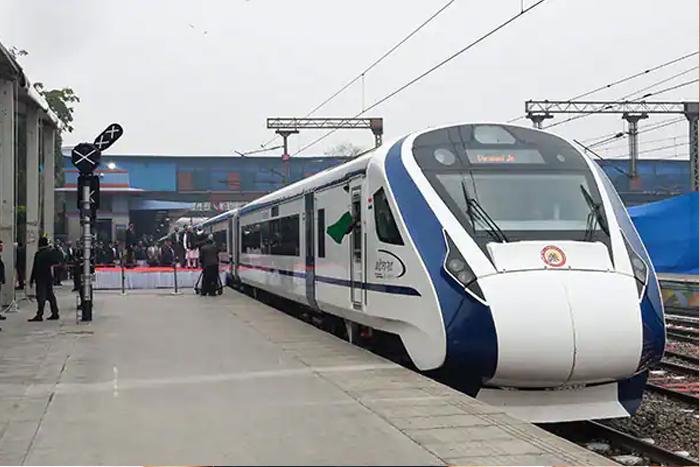 New Delhi: The country’s fourth Vande Bharat Express starting from Amb Andaura in Himachal Pradesh’s Una district will further shorten the distance to Delhi for people from northern India. It will be inaugurated by Prime Minister Narendra Modi from the Una station on Thursday.

From Chandigarh, it will reach Delhi at 6.25, reducing the train travel time between Punjab and Haryana’s combined capital and the national capital by half an hour. It will halt at Ambala.

At present, Shatabdi Express trains take about three-and-a-half hours for the Chandigarh-Delhi trip.

The journey from the origin station in Amb to Delhi will be just about five hours and a half.

This is an “advanced version” of the semi-high-speed Vande Bharat trains, “being much lighter and capable of reaching higher speed in shorter duration”. “It accelerates to 100 km/hour in just 52 seconds. The introduction of the train will help boost tourism in the region and provide a comfortable and faster mode of travel,” said the note.

Apart from flagging off the train from Una, PM Modi will lay the foundation stone of a Bulk Drug Park — a pharma manufacturing hub — at Haroli in Una district, to be be built at over ₹ 1,900 crore. “It is expected to attract investment of around ₹ 10,000 crore and provide employment to more than 20,000 people,” the government note said.

PM Modi will also “dedicate the Indian Institute of Information Technology (IIIT), Una, to the nation”. The foundation stone was laid by the PM in 2017. More than 500 students are currently studying at this IIIT.

Elections are due later this year in Himachal Pradesh.

PM Modi had last month flagged off the Vande Bharat Express in another poll-bound state Gujarat, the one from Gandhinagar to Mumbai. The first one was launched in 2019.