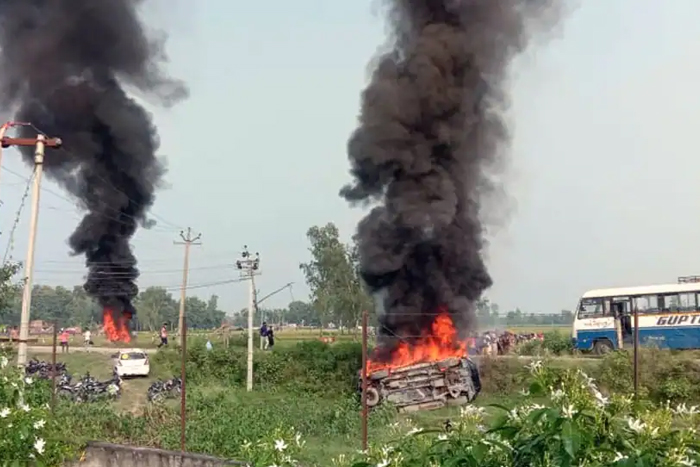 Uttar Pradesh police said on Monday they have booked Union minister of state for home Ajay Kumar Mishra Teni’s son, Ashish Mishra, and his aides based on the complaint lodged by farmers in connection with Sunday’s violence in the state’s Lakhimpur district. Lakhimpur Kheri superintendent of police (SP) Vijay Dhull said the first information report (FIR) was filed under Indian Penal Code (IPC) sections 302 for murder, 120-B for criminal conspiracy and 147 for rioting at Tikunia police station.

As many as eight people were killed as violence erupted after a car hit protesting farmers in Lakhimpur Kheri, according to police. They said that four farmers were killed after allegedly being hit by a convoy and four others who were travelling in one of the vehicles were beaten to death. The incident was reported minutes before Uttar Pradesh deputy chief minister Keshav Prasad Maurya was to visit the area. The farmers were protesting against the three central farm laws.

Samyukt Kisan Morcha (SKM), an umbrella body of dozens of farmers unions, issued a statement alleging that one of the four farmers was shot dead by Ajay Mishra Teni’s son and others were allegedly run over by the vehicles of his convoy. The minister, however, said that his son was not present at the spot and only the jeep owned by him ferrying BJP workers were there. “My son wasn’t present at the spot. There were miscreants who attacked workers with sticks and swords. If my son would’ve been there, he wouldn’t have come out alive,” he told ANI.

“During the Lakhimpur Kheri visit, our workers came to receive us amid farmers’ protest. Some miscreants from agitating farmers started stone pelting on the car and injured our driver. Due to this, our car got imbalanced and 2 people died coming under it. After this, our 3 workers were killed and cars were set on fire,” Mishra said. “They’ve killed people and damaged and torched cars. We have video evidence,” he added.He said that “four of our (BJP workers) workers were killed” and asserted that cases under section 302 will be lodged against the culprits.

Meanwhile, Lakhimpur Kheri district administration and police were holding talks with farmers’ leader Rakesh Tikait, who reached Lakhimpur Kheri late on Sunday, to end their protest and allow the bodies of the victims to be sent for postmortem examination.

Lakhimpur Kheri district magistrate AK Chaurasia said he has received a memorandum from farmers, demanding the dismissal of Union minister Mishra, registration of FIR based on their complaint, payment of ex gratia and government jobs to the family of the deceased. He said they also demand judicial probe into the Sunday incident.