You are here
Home > DAILY BAWAL > Kejriwal hosts sanitation worker, his family from Ahmedabad at his Delhi home 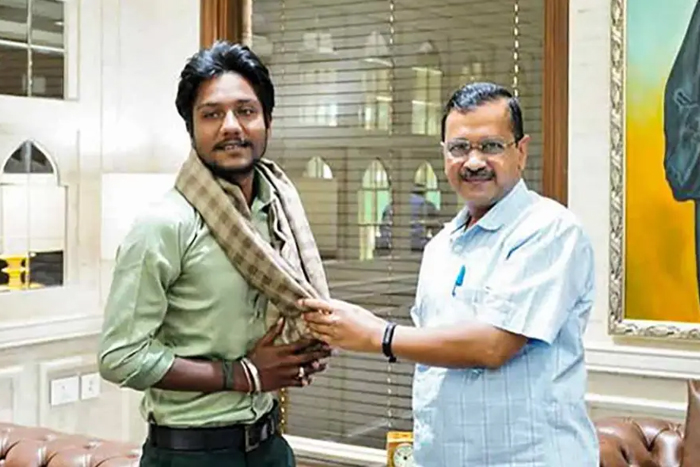 Delhi chief minister and Aam Aadmi Party national convener Arvind Kejriwal on Monday welcomed a sanitation worker, whom he had invited for lunch at his residence during a town hall with members of the community in Gujarat.

“Moment of the day, CM @ArvindKejriwal welcomes an ordinary Safai Karamchari Harsh Solanki from Gujarat, at his house,” the AAP’s caption read.

Moment of the day ❤️

During the party’s town hall with sanitation workers, predominantly from the Dalit community, in Ahmedabad on Sunday, Solanki invited Kejriwal to have dinner at his house.

“Sir, I have a request. The way you came to Gujarat last time and had a meal at the home of an auto-driver, will you come to the home of someone from the Valmiki community and have a meal?” Mr Solanki said.

“Harsh, I will definitely come to your home. But before that, I have a suggestion. Will you accept,” Kejriwal said. When Solanki agreed, Kejriwal said, “I have seen ahead of elections, all leaders go to the home of Dalits and have food. But to date, no leader has invited a Dalit to his home. So, will you come to my home for a meal?”

The audience responded with loud cheers and claps when the invitation was accepted. In a statement, Kejriwal later said he would host Solanki and his family at his residence over lunch.

Solanki would also be taken to Delhi government schools and hospitals. The AAP aims to exhibit its “Delhi model” of development and emulate the same in Gujarat.

Earlier, Kejriwal had dined at an auto driver’s residence in Ahmedabad on the latter’s invite. It was during this visit that Kejriwal had a heated exchange with personnel of the Gujarat Police as he refused to take security with him during his auto ride to the driver’s house.