You are here
Home > Bollywood Bawaal > Kamal Haasan hints at party formation, says ‘saffron’ is not his colour 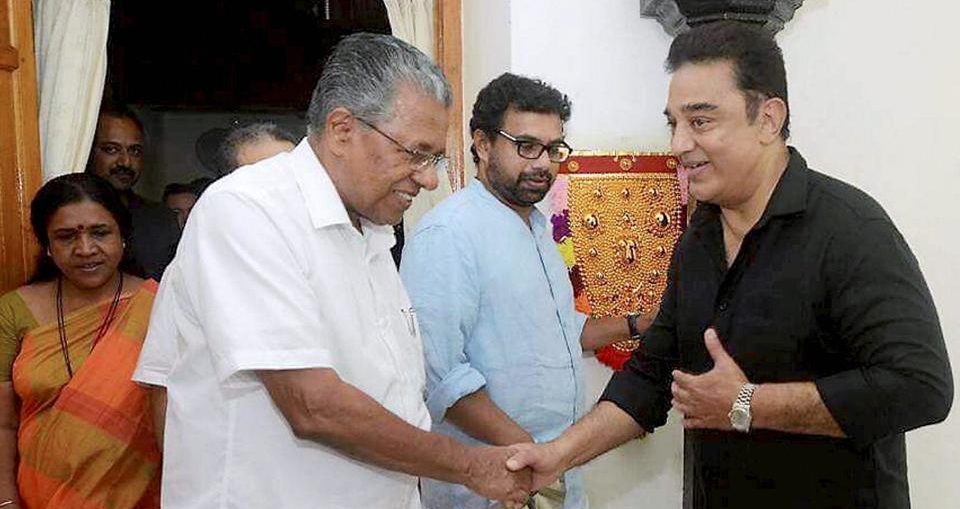 Actor Kamal Haasan being welcomed by Kerala chief minister Pinarayi Vijayan at his official residence in Thiruvananthapuram on Friday.

Acclaimed film actor Kamal Haasan on Friday hinted that he may form a political party but made it clear he won’t ally with “saffron” — the Hindu Right.

The 62-year-old superstar, who has acted in more than 220 films, made the announcement after meeting Kerala chief minister Pinarayi Vijayan here.

And stating that he won’t align with any political party in Tamil Nadu, he told the media that he would be on his own politically.

“My colour is definitely not saffron. That much I can say now,” Kamal Haasan said, in a clear reference to the BJP and RSS.

“I have got huge support from people as an artiste. If I am able to get half of this in politics, then I will be successful.”

Asked if he would discuss his political moves with the AIADMK, he said: “If I had to do that, then I did not have to wait. All that I needed to do was to clap my hands.”

Replying to a question on why he chose to make this statement after meeting Kerala’s Marxist chief minister, he said Communist leaders had always been his heroes.

“You just look at the statistics (social indicators) of Kerala and it’s comparable to any European country,” he said.

When journalists persisted and asked if he would align with the Left, he shot back: “I want to be in the middle of things and do not want to lean to any side.”

On the political situation in Tamil Nadu, he said the Governor should intervene — a demand also voiced by the opposition in the state.

Earlier, Vijayan said in a Facebook post that he and Kamal Haasan have known each other for long and they always meet whenever the actor visits Kerala.

“Today’s meeting was the first one after I became chief minister. Even though the visit was personal in nature, we discussed south Indian politics and also the overall political situation in Tamil Nadu,” Vijayan said.

The CPI-M leader received the acclaimed actor, dressed in a black shirt and dhoti, at the car porch. Also present at the meeting were Vijayan’s wife Kamala and other family members.