You are here
Home > DAILY BAWAL > India test fires Agni-V, ballistic missile with a range of over 5,000 km 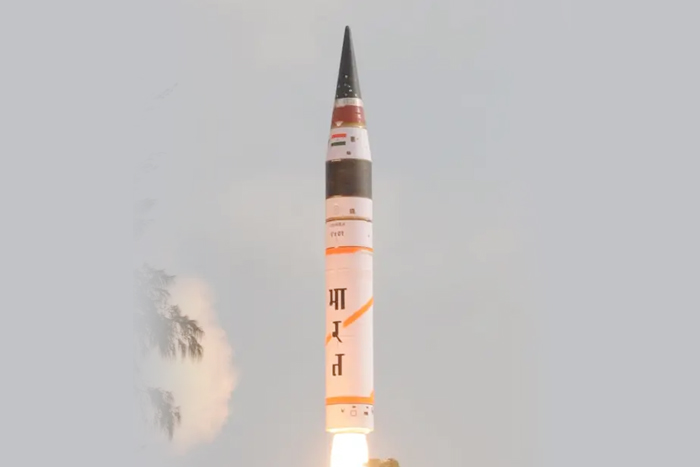 India test fires Agni-V, ballistic missile with a range of over 5,000 km

The test-firing of the missile from the Abdul Kalam Island off Odisha coast came amid India’s lingering border row with China.

INDIA on Thursday carried out a successful night time flight test of the long-range surface-to-surface Nuclear Capable Ballistic missile, Agni-5 amidst increased tension with China following the recent clashes along the LAC in Arunachal Pradesh.

Defence Ministry sources said that the test was carried out primarily to validate various new technologies onboard the missile which can strike targets at ranges of around 5,000 to 5,500 kilometers with a very high degree of accuracy. Like all other tests, the flight performance of the missile was tracked and monitored by radars, range stations and tracking systems all through the mission including by the assets deployed in the sea. The last test conducted in October 2021 was also conducted at night.

The name Agni originates from Sanskrit word for fire and is taken in the context of Agni being one five primary elements or Panch Mahabhutas. Others being Prithvi (Earth), Aapa (Water), Wayu (Air), Akash (Space). Of these names, Prithvi and Akash have been given to missiles developed by the DRDO.

Agni-5 has been successfully tested multiple times since 2012. At the time of the last test in October 2021, the Ministry of Defence in its statement had highlighted the posture of ‘credible minimum deterrence’ and ‘No First Use’ which are pivotal points of India’s nuclear doctrine, first published in 2003.

The pointers from the doctrine are: Building and maintaining a credible minimum deterrent. Posture of ‘No First Use’, meaning nuclear weapons will only be used in retaliation against a nuclear attack on Indian territory or on Indian forces anywhere. The nuclear retaliation to a first strike will be massive and designed to ‘inflict unacceptable damage.’

Medium to Intercontinental versions of Agni missiles systems 1 to 5 have varying ranges, starting from 700 kilometers from Agni-1 to 5000 kilometers and above for Agni-5. In June last year, the DRDO had successfully tested the new generation nuclear capable ballistic missile Agni P, which is an advanced variant of Agni class of missiles. Agni P is a canisterised missile with range capability between 1,000 and 2,000 kilometers.

While the DRDO has not officially declared, Agni-6 is also said to be under development with much longer range starting 8000 kilometers and has Multi Independently Targetable Re-entry Vehicle carrying capabilities.