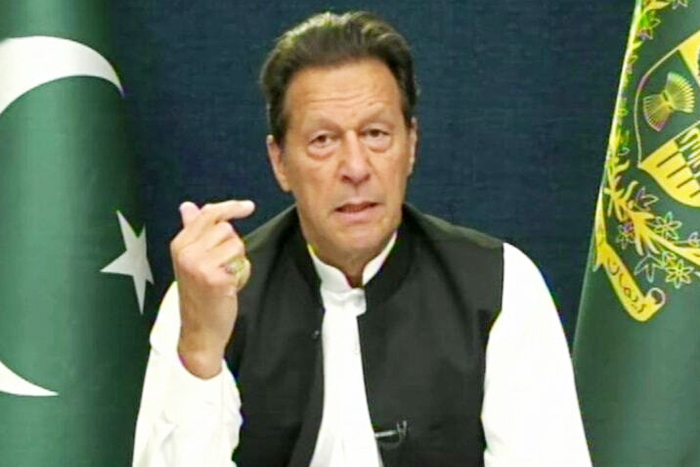 Prime Minister Imran Khan in an address to the nation on Friday said he accepts the Supreme Court’s verdict issued a day ago.

He also vowed to not accept what he termed as an “imported government” and called on the nation to come out on Sunday (April 10) after Isha prayers to hold peaceful protests.

“I am saddened by the verdict, but I accept it,” the premier said at the start of his address.

My address to the Nation 🇵🇰 https://t.co/sa2L2BZxjv

He said the deputy speaker prorogued the assembly and set aside the no-confidence motion in light of Article 5 of the Constitution.

“There was foreign interference in Pakistan’s no-confidence. I wanted the SC to at least look at it. It was a very serious allegation that a foreign country wants to topple the government through a conspiracy.”

The premier said he was at least expecting a probe by the SC.

“The SC could have at least asked for and looked at the document to gauge whether we’re speaking the truth. I was a bit disappointed because this is a very big issue and there was no discussion on it in the SC.”

PM Imran said he was also saddened at the haste with which the court made its decision.

He said open horse-trading and “buying and selling of consciences of lawmakers” was going on in the country. “Every child knows the price at which consciences are being sold.”

“What kind of democracy is this? Which democracy in the world allows this (horse-trading)? And the biggest forum for justice, the judiciary, we expected it to take suo motu action if nothing else.”

He added that “politicians are not sold this way even in banana republics”.

He lambasted PML-N supremo Nawaz Sharif and Leader of the Opposition in the National Assembly Shehbaz Sharif, claiming that they had “begun horse-trading” in Changa Manga 30 years ago and the country’s politics had worsened since then.

Even lawmakers elected on reserved seats were selling their consciences, he said, adding that those seats were a “gift” from the party.

The premier lamented that the spectacle that was taking place at the moment was a “huge setback” for his dream of seeing Pakistan become a great country.

He said he had asked people to come to the PTI’s power show titled Amr Bil Maroof (enjoin the good) — held on March 27 — because he wanted to tell them it was their responsibility to stop “evil”.

“I say to my nation, you have to save yourselves from this foreign conspiracy. If you do not stand against this, no one will come to save you.”