You are here
Home > Sports Bawaal > FIFA U-17 World Cup: Germany eye Round of 16 spot, take on ‘underdog’ Iran 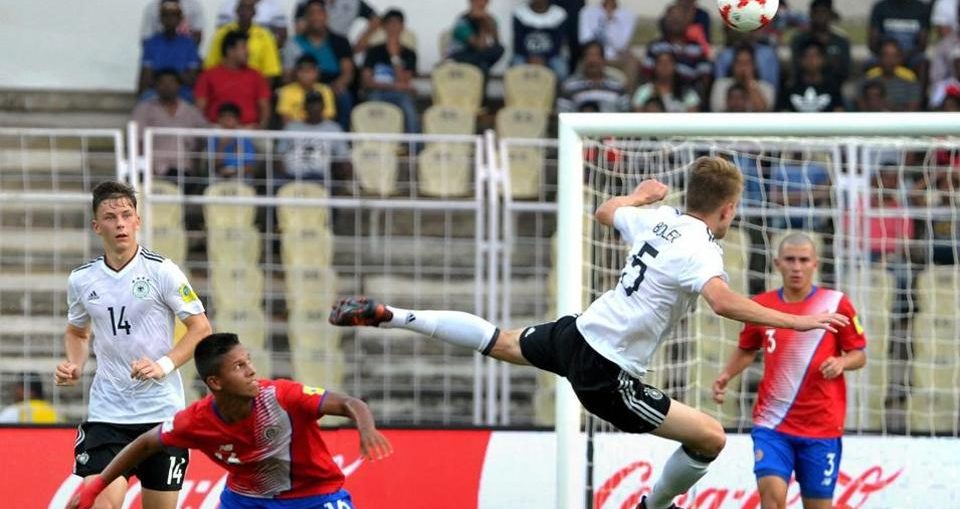 Germany will take on Iran in a Group C match of the FIFA U-17 World Cup in Goa on Tuesday.

Germany will be looking for their second win as they take on Iran in the FIFA U-17 World Cup on Tuesday.

Like fine wine, goalkeepers take time to mature. In recent times, David de Gea is a perfect example of it. He struggled during his initiation at Manchester United but is now among the top custodians in the world.

Iran coach Abbas Chamanian believes, in keeper Ali Gholam Zadeh, he already has a mature head manning the post for the under-17 side.

Chamanian also tipped Zadeh to shine bright when the Asian heavyweights take on tournament favourites Germany in a Group C encounter of FIFA U-17 World Cup at the Pandit Jawaharlal Nehru Stadium on Tuesday.

Having a sound head as part of the defensive unit always helps. In Zadeh, Iran not only have a keeper who comes up with good saves but also organises the defence well. The 17-year-old made crucial saves against Guinea in the first half of their opener on Saturday before Iran pressed home to win 3-1 on Saturday.

In Tuesday’s match, he will be up against an offensive-minded Germany team with Jann-Fiete Arp leading their line. Arp got off to a flying start, scoring and then assisting in a 2-1 win over Costa Rica.

Zadeh, the coach informs, was one of his vital cogs as they finished runners-up to Iraq in the AFC U-16 Championship last year. “He is one of the most important factors in our success. He always comes up with good saves,” said Chamanian.

Meanwhile, Germany coach Christian Wuck, who thought his team could have scored more goals against Costa Rica, feels, if the team plays to its potential, they can score many goals against Iran.

“Iran have a little advantage over us because they have played in Goa before and are accustomed to the temperature. But if my players are cool and fit, we have a good chance of making a game out of it. Score not only one or two goals but many more,” said Wuck.

Germany created 25 chances against the Central Americans but could hit the target only on nine occasions. Wuck had earlier mentioned that the turf was not to the players liking as it was making it difficult to cross due to the cropped grass cover.

Iran coach Chamanian is well aware of the fact that they will be the underdogs but he wants his team fight at every juncture. “It’s important for us to be mentally prepared to give our best performance. Football is a battle and we fight till the last moment. We must be prepared for fighting together to be successful,” said Chamanian.

It will be interesting to see how the Germans unlock the Iranians, who like to sit in their own half, soak the pressure and hit on the counter. The Germans maintained a high-line against Costa Rica and almost paid the price before winning with a late goal.