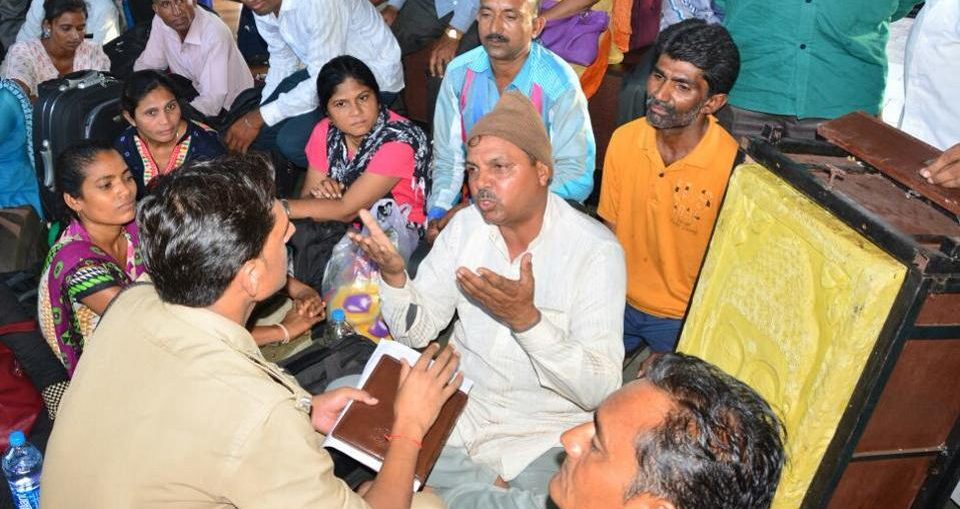 The 45-member group was carrying a 125kg bar of soap with the image of Buddha carved on it, which they want to gift to the Uttar Pradesh chief minister to allegedly “cleanse his mentality towards Dalits”.

A man talks to a police officials after the group with the 125kg bar of soap was detained.

A group of Dalit protesters from Gujarat were stopped at the Jhansi railway station on Sunday evening, with police saying the preemptive step was taken as their presence in Lucknow could disturb peace.

The 45-member group is carrying a 125kg bar of soap with the image of Buddha carved on it, which they want to gift to Uttar Pradesh chief minister Yogi Adityanath to allegedly “cleanse his mentality towards Dalits”.

The gift is viewed as a tit-for-tat response against reports of officials distributing shampoo and soap bars to 100-odd Musahar Dalit families at a village in Kushi Nagar a day before their meeting with the chief minister this May.

Village workers gave the toiletries and allegedly instructed the people to clean themselves properly before the meeting.

The incident happened after bureaucrats placed comfortable sofas, new curtains, carpets and an air-conditioner in a freshly painted room of slain BSF soldier Prem Sagar Prasad’s humble home when Adityanath called on the family to offer his condolences. These items were later taken away.

Images of the stage-managed frills attracted criticism for the government, prompting the chief minister to instruct his staff to desist from making special arrangements during such trips.

But the Kushi Nagar embarrassment followed for priest-politician Adityanath, who is a Thakur from Uttarakhand by birth.

Thereafter, more than 300 people were streaming into Lucknow from across the country with soaps, according to a protester from Gujarat.

Senior police officers said the Gujarati protesters were offloaded from the Sabarmati Express and would be kept at a guesthouse before they are sent back home.

The group is associated with a social organisation, the Dr BR Ambedkar Bechan Pratibandh Samiti.

They staged a sit-in at the platform after police cut short their journey.

“Their presence in Lucknow on Monday could have caused law-and-order trouble. We acted on inputs from state intelligence,” said Avinash Chandra, additional director general of police (Kanpur zone), who is in Jhansi.