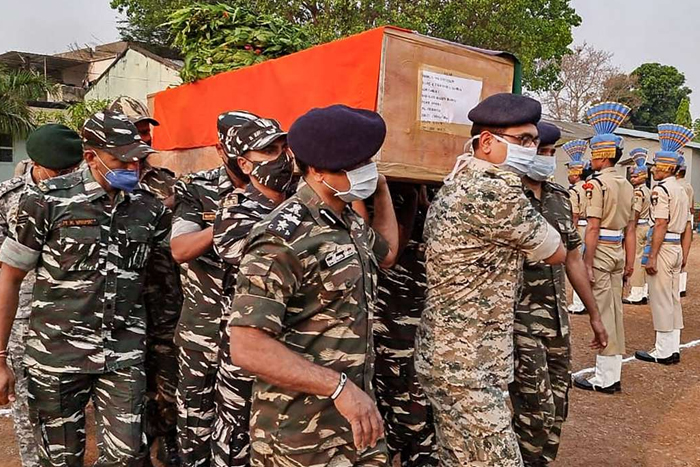 At least 22 security personnel were killed and 31 suffered serious injuries following an exchange of fire between forces and Naxals in Chhattisgarh’s Bijapur.

Chhattisgarh Police said in a statement that at least 12 Maoists were killed and 16 injured in the gun battle following the ambush. The security forces were ambushed by around 400 Naxals, who surrounded the jawans from three sides and opened fire.

1At least 22 security personnel were killed and 31 sustained injuries in the encounter with Naxals along the Sukma-Bijapur border on Saturday. The deceased included eight from the District Reserve Guard (DRG), seven from the CRPF’s CoBRA, six from the Special Task Force and one from the ‘Bastariya’ battalion of the CRPF. An officer said most of the security personnel died of bullet injuries while one is suspected to have fainted and later died due to dehydration.

Director-General of CRPF Kuldiep Singh said some 10-12 Naxals were believed to have died in the gunbattle.

The operation was launched based on the intelligence inputs about the presence of Maoists of PLGA (Peoples’ Liberation Guerilla Army) Battalion No. 1 led by Hidma, a Naxal commander involved in many deadly attacks on security forces. “At least 400 Naxals suspected to be led by most wanted Maoist commander Hidma and his associate Sujatha ambushed the forces in an area that is a stronghold of the Maoists due to the difficult terrain, large tracts of forests and a smaller number of camps of security forces,” an officer said.

The Naxals used low-intensity improvised explosive devices (IEDs) and light machine guns (LMGs) during the encounter that continued for several hours. The security personnel took cover behind large trees and kept firing till they ran out of ammunition, an official told PTI. “The Maoists drew the forces into an ambush with heavy gunfire and encircled the security personnel from three sides. A heavy gun-battle ensued in the jungles that are devoid of any foliage at present,” the official said.

On Sunday, Union Home Minister Amit Shah chaired a high-level meeting to review the situation in Chhattisgarh. “Our security men have lost their lives. We will not tolerate this bloodshed and a befitting reply will be given at an appropriate time. Our fight against Naxalites will continue with strength, perseverance and intensity, and we will take it to the end,” he said.

The Chhattisgarh Police will submit a report on the Bijapur encounter to Union Home Ministry on Monday. The report will be submitted first to Chhattisgarh Chief Minister Bhupesh Baghel before being sent to the Ministry of Home Affairs.

The worst Naxal attack till date is the 2010 strike on security forces, where 76 CRPF and state police personnel were killed at the Chintalnar area of Dantewada. In March of 2013, 25 CRPF personnel were gunned down in the Sukma area.