You are here
Home > DAILY BAWAL > Cheetah is back: B747 Jumbo sporting Big Cat motif lands in Namibia to ferry world’s fastest animal 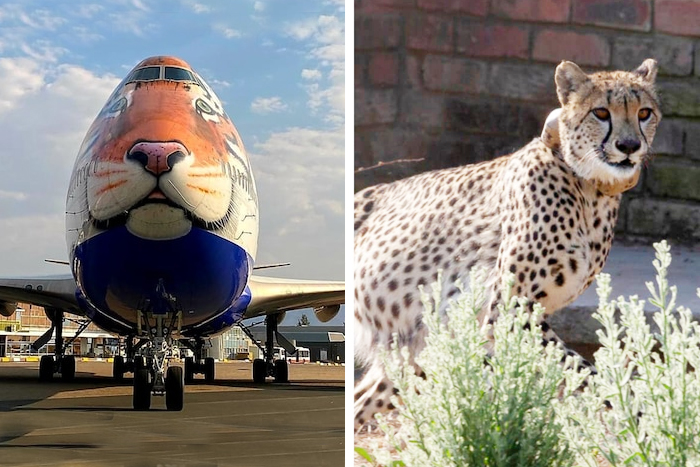 A B747 Jumbo Jet landed in Namibia on Thursday to ferry eight cheetahs who will be introduced into the Indian wildlife by Prime Minister Narendra Modi on September 17. The jumbo jet landed in the Namibian capital of Windhoek to ferry the big cat as part of one of the world’s biggest inter-continental translocation projects.

The B747 has been painted with the face of a tiger, signifying the importance of the flight mission.

The plane will land in Jaipur upon its return and the Cheetahs will then be flown to Kuno National Park in the Sheopur district of Madhya Pradesh via helicopter. The Cheetahs will be introduced in the national park by the prime minister on his birthday, completing a decade-long project that has been delayed several times in the past.

The Kunno National Park in Madhya Pradesh has been chosen as the optimum location to introduce the extinct animal for its good prey base for Cheetahs. The park has a good population of Chinkara, Spotted Deer, and Blackbuck, on which the Cheetahs can prey and grow in the wild.

The Asiatic cheetah was declared extinct in India in 1952 after Maharaja Ramanuj Pratap Singh Deo shot the last offspring of the species in 1947.