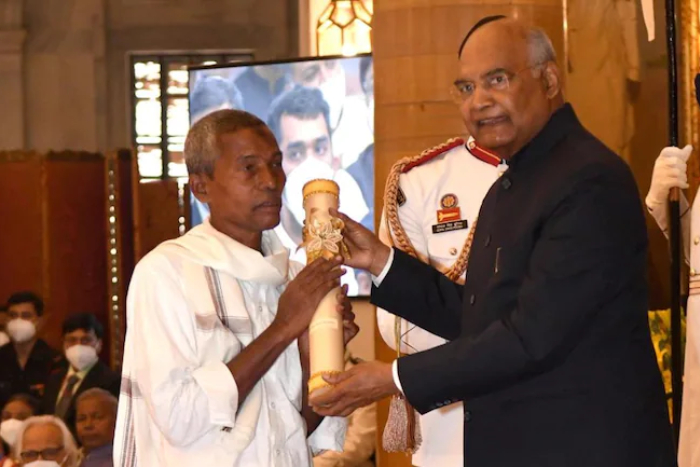 Harekala Hajabba, an orange vendor from Mangalore, built a primary school with his earnings of Rs 150 per day. On Monday, he received the Padma Shri award from President Ram Nath Kovind.

Harekala Hajabba, a 68-year-old fruit seller from Mangalore in Karnataka, built a primary school with his earnings of Rs 150 per day. On Monday, he received India’s fourth-highest civilian award, the Padma Shri, from President Ram Nath Kovind for his efforts.

President Kovind presents Padma Shri to Shri Harekala Hajabba for Social Work. An orange vendor in Mangalore, Karnataka, he saved money from his vendor business to build a school in his village. pic.twitter.com/fPrmq0VMQv

His motive? Many years ago, when a foreign tourist asked him the price of an orange in English, he did not understand what had been said and felt embarrassed. He had not had the privilege of any kind of formal education. “That day I vowed to make a school,” he said.

According to a report in The Better India, Harekala Hajabba’s village Newpadapu did not have a school for many years. All the village children were deprived of their right to education. Then, in 2000, Harekala Hajabba invested all his life savings and started a school on one acre of land.

“I had never had the opportunity to access education, and I did not want the children in the village to suffer the same fate,” he was quoted by The Better India.

“Today, the school has 175 students with classes up to the 10th standard,” Harekala Hajabba told ANI news agency.

It was announced in January 2020 that Harekala Hajabba would receive the Padma Shri award. However, the ceremony could not be held earlier due to the pandemic.